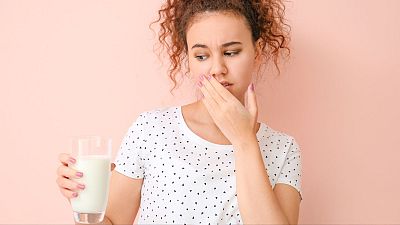 Cramps, gas and discomfort did not stop ancient Europeans from drinking milk, even when they couldn’t physically digest it.   -   Copyright  Canva
By Giulia Carbonaro  •  Updated: 28/07/2022

In the lactose intolerant community, it’s a bit of a running joke that you often throw caution to the wind and gorge on dairy products on a daily basis, damn the consequences.

While sacrificing your bowel’s peace for a bite of cheese might seem reckless, and a little bit sadistic, a study has found that humans have actually been eating dairy in the face of lactose intolerance for thousands of years.

New research carried out by over 100 scientists and published in the journal Nature found that ancient Europeans were consuming milk as adults despite the fact that they did not yet have the ability to properly digest it, and drinking it likely caused them horrible gas and cramps.

It took thousands of years for humans to develop lactose tolerance. Production of lactase, an enzyme that breaks down the sugar in milk, usually stops when children grow up into adults.

But in the past thousands of years, the ability to digest milk as adults, once a very rare trait in the human genome, started becoming more common. Scientists speculated that that happened as a result of domesticating animals and consuming milk and dairy on the regular.

But the new study, led by biogeochemist Richard Evershed at the University of Bristol, UK, found that humans were actually drinking milk thousands of years before they were able to digest it.

The scientists used ancient pottery stained with milk to geographically trace back milk consumption across the world over the past 9,000 years, mapped the communities who drank it as part of their diets, and examined ancient skeletons for DNA providing information about the presence or absence of the lactase gene.

The researchers found that lactose tolerance only became common around 1,000 B.C., some 4,000 years after the lactase gene was first detected in adults.

That means that for thousands of years, dairy consumption was already widespread among human communities - despite the fact that the majority of people would have likely felt bloated after sipping milk.

Evolution driven by famine and disease

The scientists think instead that humans developed lactose tolerance in periods of famine or infections, when they found it was more likely people turned to the consumption of milk.

Then, what was likely a minor inconvenience caused by not being able to digest milk - the same experienced by lactose-intolerant people today - turned into a major problem when people were weak and undernourished.

As lactose-induced diarrhoea and fluid loss could actually threaten people’s lives during these times, humans started developing the enzyme to be able to digest milk as adults, the team of scientists believe.

Curiously, this new study found parallels with what’s going on nowadays, in the way that lactose intolerant people are still going wild for milk and dairy, even though we think they should resist for their own good.

George Davey Smith, an epidemiologist at the University of Bristol, analysed data from the UK Biobank - a large database containing lifestyle and genetic information about nearly half a million participants - and found that among hundreds of thousands of volunteers talking about their dairy consumption, lactose intolerant people consume just as much dairy products as those who have no problems digesting them.

Not sure if this will embolden the lactose intolerant people of the 21st century to consume more dairy products than they should - but know that if you do, you’re playing into a most ancient tradition.