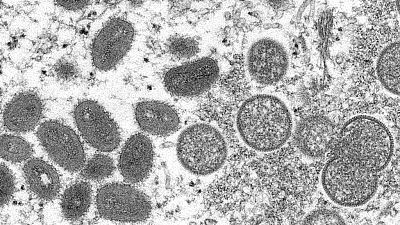 This 2003 electron microscope image made available by the Centers for Disease Control and Prevention shows mature, oval-shaped monkeypox virions.   -   Copyright  AP/CDC
By Euronews  with AFP and AP  •  Updated: 24/07/2022

WHO has declared an international health emergency over the monkeypox outbreak, which has affected nearly 17,000 people in 74 countries.

The chief of the World Health Organization described the surge in monkeypox infection as "extraordinary", while triggering the highest level of alert on Saturday.

"We have an outbreak that has spread around the world rapidly through new modes of transmission about which we understand too little and which meets the criteria in the international health regulations," WHO director-general Tedros Adhanom Ghebreyesus said at a press conference.

Declaring a "public health emergency of international concern", he said the risk of monkeypox was relatively high across the world, including in Europe and North America, where it is not normally found.

This is the first time the chief of the UN health agency has taken such an action.

An international emergency is the WHO's highest level of alert, but this designation does not mean a disease is especially lethal or infectious.

"It's a call to action," said Dr Ryan, hoping the move would lead to collective action against the disease.

No agreement at WHO over emergency level

Dr Ghebreyesus made the declaration without agreement among experts in the WHO's emergency committee, who remain divided over whether it is necessary to trigger the highest level of alert.

Detected in early May, the unusual upsurge in cases of monkeypox, outside the countries of central and western Africa where the virus is endemic, has since spread throughout the world, with Europe as its epicentre.

The disease has now struck more than 16,836 people in 74 countries, according to the US Centers for Disease Control and Prevention (CDC).

Declaring a global emergency means the monkeypox outbreak is an “extraordinary event” that could spill over into more countries and requires a coordinated global response.

This is only the 7th time that the WHO has used this level of alert.

The UN agency previously declared emergencies for public health crises such as the COVID-19 pandemic, the 2014 West African Ebola outbreak, the Zika virus in Latin America in 2016 and the ongoing effort to eradicate polio.

It only declares a "public health emergency of international concern" in "serious, sudden, unusual or unexpected" situations.

Diseases in this category are defined by the UN body as an "extraordinary event" whose spread constitutes a "risk to public health in other states" and may require "coordinated international action".

The emergency declaration mostly serves as a plea to draw more global resources and attention to an outbreak. Past announcements have had a mixed impact, since WHO is largely powerless to get countries to act.

To date, monkeypox deaths have only been reported in Africa, where a more dangerous version of the virus is spreading, mainly in Nigeria and Congo.

First detected in humans in 1970, monkeypox is less dangerous and contagious than its cousin human smallpox, which was eradicated in 1980

Georgia's lack of clean domestic water due to decaying infrastrucre

How the ‘Centaurus’ Omicron subvariant could become dominant worldwide