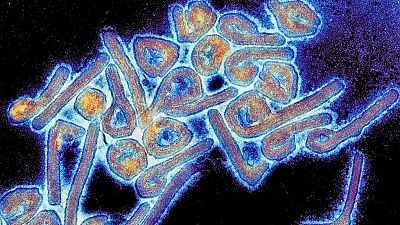 A micrograph of the highly contagious and deadly Marburg virus   -   Copyright  The University of Texas Medical Branch at Galveston
By Euronews  with AP  •  Updated: 18/07/2022

Two people in Ghana have died from the highly contagious Marburg virus, which causes illness similar to Ebola.

Tests came back positive for Marburg in two cases where the patients died at the end of June, prompting Ghana to declare its first-ever outbreak of the virus.

Marburg, named after the town in Germany where the first case was recorded, is a very infectious disease that causes fever and other symptoms similar to Ebola.

It spreads through direct contact with bodily fluids of infected people and surfaces.

The two patients in southern Ghana's Ashanti region both had symptoms including diarrhoea, fever, nausea and vomiting, before dying in hospital, the World Health Organization (WHO) said in a statement on Monday.

" Health authorities have responded swiftly, getting a head start preparing for a possible outbreak. This is good because without immediate and decisive action, Marburg can easily get out of hand," said Matshidiso Moeti, WHO’s Regional Director for Africa.

What is Marburg virus?

According to the WHO, it is transmitted to humans from contact with fruit bats, a natural host of the virus, and then spreads from human-to-human through contact with bodily fluids of infected people, and infected surfaces and materials.

Initial symptoms begin abruptly, with high fever, headache and tiredness, with muscle aches and pains a common feature. On the third day of illness, patients can suffer from diarrhoea, abdominal pain, nausea and vomiting.

Patients can start vomiting blood or see it in their faeces, but they can also bleed from the nose, gums, and vagina, according to the WHO.

It is an extremely dangerous virus, with an average case fatality rate of around 50 per cent - although this has varied from 24 per cent to 88 per cent in past outbreaks, depending on the virus strain and the medical care given.

According to the WHO, there is currently no licenced treatment proven to neutralise the virus

Where has Marburg virus been detected?

These latest cases were discovered in Ghana, in what is only the second outbreak of Marburg virus in West Africa. The first case in that region was in Guinea last year.

More than 90 contacts, including health workers and community members, have been identified and are being monitored.

There have been a dozen major Marburg outbreaks since 1967, mostly in southern and eastern Africa.

The first cases were however recorded in Germany - in Marburg and Frankfurt - and in Belgrade, Serbia, in 1967.

These outbreaks were linked to lab work using African green monkeys imported from Uganda. Since then, there have been sporadic cases reported in Angola, the Democratic Republic of the Congo, Kenya, South Africa, and Uganda.

How hot is too hot? It’s not just temperature - humidity matters too

Monitoring fever, stress and nightmares: The latest in health tech