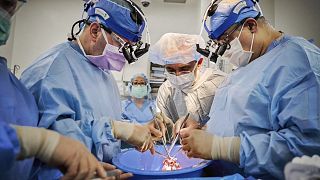 The genetically engineered hearts were transplanted into two people who had recently died and who were being maintained on ventilator support, the team from NYU Langone Health announced on Tuesday.

The procedures were carried out in June and July this year, and each recipient was monitored for three days.

No signs of early rejection were observed, said the team, and the hearts functioned normally with standard post-transplant medications and without additional mechanical support.

The hearts were taken from pigs that had 10 genetic modifications - four to prevent rejection and abnormal organ growth, and six to prevent disruption caused by incompatibilities between pigs and humans.

“Our goal is to integrate the practices used in a typical, everyday heart transplant, only with a nonhuman organ that will function normally without additional aid from untested devices or medicines,” said Dr Nader Moazami, surgical director of heart transplantation at the NYU Langone Transplant Institute.

His team’s procedures come a few months after the death of David Bennett, the first person to have received a genetically modified pig's heart.

Bennett had suffered from terminal heart disease before receiving the transplant on Jan 7 at the University of Maryland.

He died in early March, after his condition began to deteriorate. The reasons why his new heart eventually failed are still unclear, however a study following his death said that an autopsy did not find signs of typical rejection.

For the current experiments, NYU procured hearts from pigs engineered by biotechnology company Revivicor (which also produced Bennett’s heart), and screened them for viruses using an enhanced monitoring protocol, the researchers said.

The hearts showed no evidence of a pig virus called porcine cytomegalovirus that was detected in Bennett’s blood and may have contributed to his death.

In the experiments with brain-dead patients, no presence of porcine cytomegalovirus was detected in either case, said the NYU team, adding that strict protocols to prevent potential transmission were also carried out.

The operating room used for this study will also only be used for xenotransplantation research in future.

Studies with donors who have recently died are critical to gathering the additional human data needed to advance the field, said Dr Robert Montgomery, director of the NYU Langone Transplant Institute.

“Our greater purpose is to address the organ shortage and provide another option for the more than 100,000 people nationwide waiting on that lifesaving gift,” he said.

“The paradigm of whole-body donation - when organ donation is not a viable option - is critical to this work moving forward”.

These types of transplantations are also more informative because biopsies can be done more often.

"We were able in real time to capture everything that was going on during that 72-hour period," said Dr Montgomery.

Can smart sensors on trees protect our forests from wildfires?