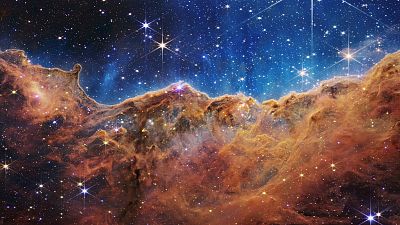 A sparkling landscape of baby stars. A foamy blue and orange view of a dying star. Five galaxies in a cosmic dance. The splendours of the universe glowed in a new batch of images released on Tuesday from NASA's powerful new telescope.

The unveiling from the $10 billion James Webb Space Telescope began on Monday at the White House with a sneak peek of the first shot - a jumble of distant galaxies that went deeper into the cosmos than humanity has ever seen.

Tuesday's releases showed parts of the universe seen by other telescopes. But Webb’s sheer power, distant location from Earth and use of the infrared light spectrum showed them in a new light.

“It’s the beauty but also the story,” NASA senior Webb scientist John Mather, a Nobel laureate, said after the reveal. “It’s the story of where did we come from.”

And, he said, the more he looked at the images, the more he became convinced that life exists elsewhere in those thousands of stars and hundreds of galaxies.

With Webb, scientist hope to glimpse light from the first stars and galaxies that formed 13.7 billion years ago, just 100 million years from the universe-creating Big Bang. The telescope also will scan the atmospheres of alien worlds for possible signs of life.

“Every image is a new discovery and each will give humanity a view of the humanity that we’ve never seen before,’’ NASA Administrator Bill Nelson said on Tuesday, rhapsodising over images showing “the formation of stars, devouring black holes”.

Webb's use of the infrared light spectrum allows the telescope to see through the cosmic dust and “see light from faraway light from the corners of the universe,” he said.

The European and Canadian space agencies joined NASA in building the powerful telescope.

The first “deep field" image released on Monday during a brief White House event is filled with numerous stars, with massive galaxies in the foreground and faint and extremely distant galaxies peeking through here and there.

The shot shows SMACS 0723 - a cluster of galaxies in the Southern Hemisphere constellation, Volans - with the cluster itself some 4.6 billion light-years away.

Part of the image is light from not too long after the Big Bang, which was estimated to have taken place 13.8 billion years ago.

President Joe Biden marvelled at the image that he said showed “the oldest documented light in the history of the universe from over 13 billion - let me say that again - 13 billion years ago. It’s hard to fathom”.

The busy image with hundreds of specks, streaks, spirals and swirls of white, yellow, orange and red - the gravitational warping effect as the light traverses immense distances to reach the telescope - is only “one little speck of the universe,” NASA Administrator Bill Nelson said.

“What we saw today is the early universe,” Harvard astronomer Dimitar Sasselov said in a phone interview after the reveal.

Even more came on Tuesday:

— Southern Ring nebula, which is sometimes called “eight-burst": Images show a dying star with a foamy edge of escaping gas. It's about 2,500 light-years away. A light-year is 5.8 trillion miles.

— Carina nebula, one of the bright stellar nurseries in the sky, about 7,600 light-years away. One view was a stunning landscape of orange cliffs.

— Stephan's Quinet, five galaxies in a cosmic dance that was first seen 225 years ago in the constellation Pegasus. It includes a black hole that scientists said showed material “swallowed by this sort of cosmic monster”.

— A giant planet called WASP-96b. It’s about the size of Saturn and is 1,150 light-years away. A gas planet, it’s not a candidate for life elsewhere but a key target for astronomers. Instead of an image, the telescope used its infrared detectors to look at the chemical composition of the planet’s atmosphere. It showed water vapor in the super-hot planet's atmosphere and even found the chemical spectrum of neon.

The images were released one by one at an event at NASA’s Goddard Space Center that included cheerleaders with pompoms the colour of the telescope’s golden mirrors.

“It moves you. This is so so beautiful,” Thomas Zurbuchen, chief of NASA’s science missions, said after the event. "Nature is beautiful. To me this is about beauty”.

What is the Webb Telescope?

The James Webb Space Telescope is a revolutionary apparatus designed to peer through the cosmos to the dawn of the universe.

Webb, which views its subjects chiefly in the infrared spectrum, is about 100 times more sensitive than its 30-year-old predecessor, the Hubble Space Telescope, which orbits Earth from 547 km away and operates mainly at optical and ultraviolet wavelengths.

Hubble has stared as far back as 13.4 billion years. It found the light wave signature of an extremely bright galaxy in 2016.

Astronomers measure how far back they look in light-years, with one light-year being 9.3 trillion km - the distance light covers in one Earth year.

“Webb can see backwards in time to just after the Big Bang by looking for galaxies that are so far away that the light has taken many billions of years to get from those galaxies to our telescopes,” Jonathan Gardner, Webb’s deputy project scientist said during a June media briefing.

The larger light-collecting surface of Webb's primary mirror - an array of 18 hexagonal segments of gold-coated beryllium metal - enables it to observe objects at greater distances, thus further back in time, than Hubble or any other telescope.

Its infrared sensitivity allows it to detect light sources that would otherwise be hidden in the visible spectrum by dust and gas.

Taken together, these features are expected to transform astronomy, providing the first glimpse of infant galaxies dating to just 100 million years after the Big Bang, the theoretical flashpoint that set the expansion of the known universe in motion an estimated 13.8 billion years ago.

Webb's instruments also make it ideal to search for signs of potentially life-supporting atmospheres around scores of newly documented planets orbiting distant stars and to observe worlds much closer to home, such as Mars and Saturn's icy moon Titan.

At 6.4 metres, Webb’s gold-plated, flower-shaped mirror is the biggest and most sensitive ever sent into space.

It’s comprised of 18 segments, one of which was smacked by a bigger than anticipated micrometeoroid in May. Four previous micrometeoroid strikes to the mirror were smaller. Despite the impacts, the telescope has continued to exceed mission requirements, with barely any data loss, according to NASA.

“I’m now really excited as this dramatic progress augurs well for reaching the ultimate prize for many astronomers like myself: pinpointing Cosmic Dawn - the moment when the universe was first bathed in starlight,” said Richard Ellis, professor of astrophysics at University College London.

The €8.93 billion infrared telescope, the largest and most complex astronomical observatory ever sent to space, was launched on Christmas Day from French Guiana, on the northeastern coast of South America.

A month later, the 6,350-kg instrument reached its gravitational parking spot in solar orbit, circling the sun in tandem with Earth nearly 1.6 million km from home.

Then the lengthy process began to align the mirrors, get the infrared detectors cold enough to operate and calibrate the science instruments, all protected by a sunshade the size of a tennis court that keeps the telescope cool.

The plan is to use the telescope to peer back so far that scientists will get a glimpse of the early days of the universe about 13.7 billion years ago and zoom in on closer cosmic objects, even our own solar system, with sharper focus.

The first batch of photos, which have taken weeks to process from raw telescope data, offers a compelling glimpse at what Webb will capture on the science missions that lie ahead.

With Webb now finely tuned and fully focused, astronomers will embark on a competitively selected list of science projects exploring the evolution of galaxies, the life cycles of stars, the atmospheres of distant exoplanets and the moons of our outer solar system.

Besides a host of studies already lined up for Webb, the telescope's most revolutionary findings may prove to be those that have yet to be anticipated.

Such was the case in Hubble's surprising discovery, through observations of distant supernovas, that the expansion of the universe is accelerating, rather than slowing down, opening a new field of astrophysics devoted to a mysterious phenomenon scientists call dark energy.