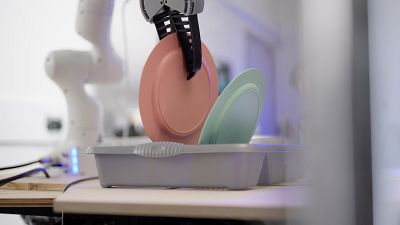 Dyson has revealed it's secretly working on robots that will be able to do household chores.   -   Copyright  Dyson
By Giulia Carbonaro  •  Updated: 25/05/2022

You might know Dyson for its sci-fi looking vacuum cleaners, futuristic-looking fans and its state-of-the-art hairdryers. But Dyson has been working on a secret project you probably do not know about and could realise a dream that humanity has been nurturing for decades now: robots.

And not just any robot (you may already consider some of their vacuum cleaners as robots, from a technical perspective). Dyson has revealed that it is betting on the construction of robots that will be able to do household chores. The company expects the new technology to be available by 2030.

Imagine mighty robotic hands gently picking up the dishes from the rack and setting up the table for lunch. A video shared by Dyson accompanying the announcement of their new business idea on Wednesday shows that this fantasy that looks straight out of a 1950s sci-fi film is now (almost) reality, as Dyson’s prototypes are already able to pick up teddy bears from the floor and find crisps fallen into the cracks of the couch.

According to Dyson, the new robots will be able to handle delicate tasks and deal with fragile objects, something that robotics has until now struggled to achieve to a satisfactory level.

Jake Dyson said the company has been doing research on robotics “that nobody is aware of” for the past 20 years.

For the past ten years, according to Dyson, the company has been sponsoring research at London’s Imperial College. They’re now setting up three more offices, two in the United Kingdom and one in Singapore.

Dyson said that the research is “very top secret” and the company is only now revealing snippets of information to attract the best engineers around the world. Dyson is looking to hire 700 robotics engineers to work on the “brain” of these household chores robots.

If successful, the move will be a revolution in robotics, finally bringing this type of robot, which is already used in factory settings, into people’s homes.

Watch: Scientists 3D print and transplant an ear made of human cells