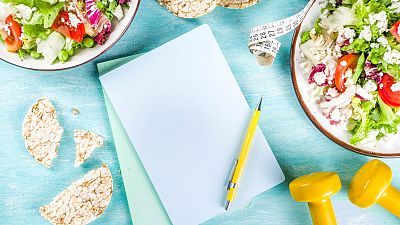 The UK and Greece are among the worst hit by obesity. But they’re both trying promising solutions to slim down   -   Copyright  Canva
By Natalie Huet  •  Updated: 07/05/2022

The World Health Organization (WHO) has urged Europe to reverse its obesity “epidemic", which it estimates is causing at least 1.2 million deaths a year.

The UN agency says nearly 60 per cent of adults and almost a third of children across the continent are overweight or obese. Those rates are higher than in any other region of the world except for the Americas.

However, the WHO says the trend can be reversed - and two of Europe’s worst-affected countries are already trialling promising solutions.

Cracking down on fatty foods

The WHO has long urged countries to tax sugary drinks and fatty foods to fight obesity and type 2 diabetes, but governments have been slow to move ahead with plans that might prove unpopular with businesses or lower-income households.

Still, there are encouraging signs that change may be on its way, including in the UK, which ranks as the fourth worst country in WHO Europe’s report on the prevalence of overweight and obesity among adults.

In April, mandatory calorie labelling was introduced for restaurants, cafes and takeaways in England with more than 250 employees.

From October, the government will ban multibuy deals such as ‘buy one get one free’ or ‘3 for 2’ offers on food and drinks that are high in fat, sugar and salt. Supermarkets will no longer be allowed to promote unhealthy food and drinks in key locations such as store entrances and checkouts.

A new watershed policy restricting the advertising of food and drink high in salt, fat and sugar before 9 pm on TV will also be introduced by 2023.

These policy changes are all recommended by the WHO, which is also urging governments to crack down on the proliferation of takeaway outlets in low-income neighbourhoods.

One step at a time

One Briton who has already managed to successfully turn her eating habits and lifestyle around is 50-year-old Londoner Vicki Prais, an independent human rights lawyer.

Determined to feel healthier and more comfortable with her looks, she joined the weight loss programme Slimming World and started walking 10,000 steps each day - keeping track with a Fitbit bracelet - and cooking healthy meals throughout COVID-19 lockdowns.

"I know a lot of people put on a huge amount of weight during the pandemic. I kind of went the other way and slimmed down," Prais told Euronews Next, noting that fear of contracting a severe case of COVID-19 - for which obesity is a risk factor - was "a bit of a trigger".

The result, she said, has been life-changing.

“From a health perspective, I feel a lot better, but I think mentally as well, it's given me a lot more confidence,” she said, adding it made it easier for her to engage with prospective clients.

Of course, temptations remain, and her advice to anyone seeking to lose weight is to set small, achievable targets, and take one day at a time.

"I was a big fan of takeaways and probably ate too many ready meals for my liking. I am now very careful when I buy ready meals and look at the saturated fat content before purchase," she said.

She called the UK’s calorie-labelling scheme "a step in the right direction" and keeps photos of her former overweight self on her kitchen door to stay focused.

"I don't ever want to go back to being big Vicki again," she said.

Unhealthy eating habits are picked up early on in life, and public health bodies encourage governments to nip them in the bud.

Nearly 30 per cent of children across Europe are overweight or obese, the WHO report found, leading the health body to urge governments to combat the promotion of unhealthy food products to youngsters and limit "the proliferation of sedentary online gaming".

In Greece, over 40 per cent of children are overweight, and nearly one in five are obese - among the highest rates in Europe.

But for the past decade, a charity has been providing free and nutritionally sound meals across the country’s most underprivileged schools in a bid to combat food insecurity and obesity.

The programme, called DIATROFI (“feeding” in Greek), was launched in the wake of the country’s sovereign debt crisis and recession, when teachers started witnessing pupils fainting because they came to school on an empty stomach.

To date, the initiative has brought over 17 million free meals to around 120,000 students in 800 schools across the country, and has been cited by the WHO as an exemplary way of encouraging healthy eating choices early on in life.

The hearty breakfasts, designed with the input of nutritionists, are handed out by 9 am and include a sandwich or other healthy baked goods, seasonal fresh fruit and white milk or yoghurt with honey.

The meals are provided for free to all the students in the participating schools, regardless of their socioeconomic background, to prevent stigmatisation and bullying.

The programme also provides educational material, books, games and other activities for the pupils, their parents and the teachers on the topic of healthy nutrition.

The Prolepsis Institute, which runs the scheme, says it achieves on average each year a 40 per cent reduction in childhood obesity rates and a one-third reduction in overweight levels in the schools it caters to.

In other words, nearly half of the children who start the school year as obese no longer fall into that category come the summer holidays.

They typically do remain overweight, but some 8.5 per cent who were obese do slim down to the point of reaching a normal weight.

"It's a big effect," Athena Linos, president of the Prolepsis Institute, told Euronews Next.

"Although from what we know, many of the children, when they return after the summer, may have gained weight," she noted.

She said there was still room for improvement when it comes to controlling other foods that may be entering Greek schools, like soft drinks high in sugar, as well as limiting TV advertisements for unhealthy foods, especially during broadcast programmes targeted at children.