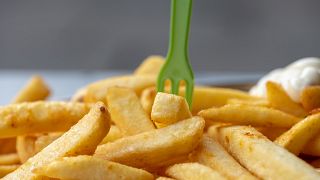 Obesity in Europe has reached "epidemic proportions," and is causing at least 200,000 cancer cases and 1.2 million deaths a year, a new report published by the World Health Organization (WHO) said on Monday.

Almost a third of children and 59 per cent of adults in Europe are overweight or living with obesity, the report said.

Boys were slightly more likely than girls to be overweight or obese, it said.

Being overweight or obese is also Europe's fourth-biggest killer, the WHO European Regional Obesity report said, and are responsible for an estimated 1.2 million deaths in the region each year, around 13 per cent of the total.

Europe's rates of obesity are higher than any WHO region other than the Americas, the UN body said, adding that they rose 138 per cent between 1975 and 2016.

The COVID-19 pandemic did nothing to help the situation, WHO Europe director Dr Hans Henri Kluge wrote in a foreword to the report.

Lockdowns, school closures and remote working may have also contributed to rising rates of obesity in Europe, he added.

"Preliminary evidence suggests that many of the restrictions related to containment of the pandemic, including school closures and periods of restricted population movements, have led to an increase in exposure to some of the risk factors that influence a person’s likelihood to experience obesity or overweight," Kluge said.

We know our children are just barraged with advertising, increasingly in the digital world, even when they're on video games, they're seeing ads for foods high in fat, sugar and salt

But there are also longer-term lifestyle and social factors putting Europeans at risk of being overweight or obese.

"We live in environments where we have easy access to cheap and delicious food and where it's really easy to be sedentary all day," co-author of the report Julianne Williams, WHOs technical officer for noncommunicable diseases, said.

"We know our children are just barraged with advertising, increasingly in the digital world, even when they're on video games, they're seeing ads for foods high in fat, sugar and salt," she said, adding that Europe's low breastfeeding rates were another risk factor associated with higher levels of obesity.

For the situation to change, effective policy changes need to be put in place at government level, Williams told the Associated Press.

"It's not just about telling individuals to change their behaviour, it's about policy change. So sugary drinks, sugar-sweetened beverage taxes and I think having restrictions on advertising for children especially, increasing access, equitable access to high quality obesity management services," she said.

The WHO is also recommending that governments limit "the proliferation of takeaway outlets in low-income neighbourhoods,'" recommend breastfeeding, improve labelling for baby food, frame healthy eating as a way to fight climate change, as well as offer more access to wellbeing programmes.

Based on a dataset from 2016, the new report compiled statistics from 53 European countries and is the first WHO report on obesity in Europe since 2007.