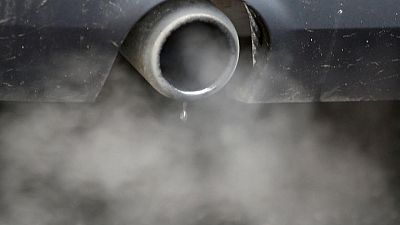 By Barbara Lewis and Nick Carey

LONDON – A regulatory gap allows automakers like Ford and BMW to make U.S. cars that emit more ultrafine particles that harm human health than equivalent models sold in Europe and other markets, according to new research.

British testing specialist Emissions Analytics took four pairs of cars – from Ford, BMW, Toyota and Stellantis – and compared the impact of tailpipe filters that are widely used in Europe where regulations limit the number of harmful particles that can be emitted, but not in the United States where the same regulations do not apply.

China and India use similar standards to Europe.

According to industry estimates, a gasoline particulate filter costs carmakers around $200.

The research found in a cold start in an urban area, the average European model emitted 83.7% fewer particles than its U.S. counterpart.

Emissions Analytics said the biggest difference was in the Ford Kuga, which consistently emitted 95% fewer harmful particles than its U.S. sibling the Ford Escape, and 96% in a warm highway start.

Ford, BMW, Stellantis and Toyota said they build their vehicles to meet all local regulations and emphasised they will each spend tens of billions of dollars to switch to zero-emission electric vehicles.

“Each and every BMW vehicle sold in the U.S. either meets or exceeds the U.S. requirements for vehicles in this market,” BMW said in an email.

The filters are used on both diesel and gasoline vehicles across markets and are fitted on U.S. diesel vehicles, which usually produce bigger, heavier particles.

But the gasoline vehicles Emissions Analytics tested in the United States have been assumed to meet standards set by U.S. regulator the Environmental Protection Agency (EPA) without requiring a filter.

Ultrafine particles are harmful because their microscopic size means they can be drawn deep into human lungs.

Even under the most aggressive U.S. scenarios for phasing out ICEs, they will likely be sold into the 2030s.

“There is a strong argument we should do what we can to make ICE vehicles as clean as possible, whatever the speed of electrification,” Molden said.

In emailed comments, the EPA said carmakers had met its standards without needing filters, but it is looking at filters and other technologies for new rules from 2027.

“We hope to continue to incentivise stricter emissions standards for vehicles going forward,” the agency said.