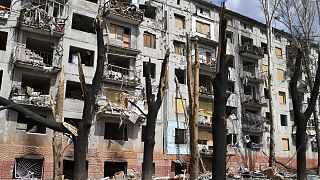 A view of a block of apartments buildings damaged by shelling in Kramatorsk, Ukraine, Friday, April 15, 2022.   -   Copyright  Andriy Andriyenko/Associated Press
By Euronews and AP  •  Updated: 22/04/2022

The mounting economic damage to Ukraine from Russia's ongoing bombardment has the US and its European allies speeding billions in aid to the beleaguered country - and looking for other sources of cash as well, including Russia itself.

After the US announced $1.3 billion (€1.2 billion) in new economic assistance and military aid to Ukraine on Thursday, the country's Treasury Secretary Janet Yellen acknowledged that "this is only the beginning of what Ukraine will need to rebuild".

As well as military aid of €1 billion to fund its defence, the EU has already given Ukraine around €600 million from its emergency macro-financial assistance fund to help shore up its economy.

The war has already caused more than $60 billion (€55 billion) in damage to buildings and infrastructure, World Bank President David Malpass said. And the International Monetary Fund (IMF) in its latest world economic outlook stated that Ukraine's economy will shrink by 35 per cent this year and next.

The question of who will pay to restore Ukraine from the war has increasingly turned to the Russian state.

A special tax on war

Yellen said on Thursday that looking to Russia itself for funds to rebuild Ukraine "is something we ought to be pursuing".

When asked during a press briefing about the potential of using frozen Russian Central Bank funds to support Ukraine, Yellen said, "I wouldn’t want to do so lightly," adding that it would have to be done in consensus with US allies and partners.

Ukrainian president Volodymyr Zelenskyy said in a virtual address to IMF and World Bank leaders that "a special tax on war is needed". He called for the proceeds of sanctioned property and Central Bank reserves to be used to compensate Ukraine for its losses.

He added that frozen Russian assets "have to be used to rebuild Ukraine after the war as well as to pay for the losses caused to other nations".

The statements came after the Biden administration announced that the US is providing an additional $500 million (€461 million) in financial assistance to Ukraine to sustain salaries, pensions, and other government programs while it fends off Russia's invasion.

"We plan to deploy this direct aid to Ukraine as soon as possible, to be used on the most urgent needs," Yellen said.

The new funding is on top of $500 million (€461 million) in economic aid that President Joe Biden unveiled in March.

Yellen met before the announcement with Ukrainian prime minister Denys Shmyhal, along with Treasury Deputy Secretary Wally Adeyemo and Ukrainian finance minister Serhiy Marchenko. The announcement comes against the backdrop of IMF and World Bank spring meetings dominated by conversations over how to manage the spillover from Russia's war in Ukraine.

Russia to foot the bill for Ukraine's reconstruction?

The calls to use frozen Central Bank funds to rebuild Ukraine are growing as the human and financial cost of the war mounts. Additionally, governments that volunteer grants and aid to Ukraine must grapple with rising inflation impacting food and energy prices in their home countries.

It simply cannot be business as usual for Russia in terms of its participation in our global forums.

However, liquidating Russia’s frozen Central Bank assets, among other sanctioned property, will not be easy and will likely require congressional action.

"I am unclear whether or not it would be possible without legislation authorising the use of those assets," Yellen said.

The Treasury Department imposed a new wave of sanctions against Russia on Wednesday. Included in the sanctions packages are penalties imposed on more than 40 people and entities accused of evading sanctions. The sanctions include the first set of penalties against a cryptocurrency mining firm in relation to the war.

Yellen said Thursday that the US was continuing to “tighten the vise of our economic pressure campaign".

She responded cautiously to a question about whether European allies needed to ban Russian oil and gas imports, a recurring issue during the war in Ukraine.

"Europe clearly needs to reduce its dependence on Russia in respect to energy. But we need to be careful," Yellen said, pointing out there would be a resulting rise in oil prices worldwide. Under that situation, she said, Russia could still benefit financially even if its sales in Europe declined.

On Wednesday, Yellen and Ukraine’s finance minister walked out of a G20 meeting as Russia’s representative started talking.

Several other finance ministers and central bank governors also left the room, according an official familiar with the meetings, who spoke on the condition of anonymity because the event was not public.

Some ministers and central bank governors who attended the meeting virtually turned their cameras off when Russian president Vladimir Putin’s representative spoke, the person said.

"It simply cannot be business as usual for Russia in terms of its participation in our global forums," Yellen said.

Yellen was noncommittal, though, on proposals to remove Russia from the G20, which is made up of representatives of industrial and emerging-market nations.

"We will look for a way to make our disapproval known while still recognizing we have a lot of work to accomplish," she said.