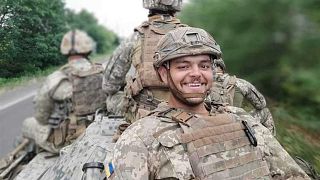 YouTube removed a video on Saturday of a British man captured by Russian armed forces after a lawmaker raised the issue in the UK's parliament earlier this week, calling it a "flagrant breach of the Geneva Conventions".

Aiden Aslin, who has lived in Ukraine since 2018, was part of a unit of Ukrainian Marines fighting in the besieged city of Mariupol in southern Ukraine before he was taken prisoner last week after running out of food and ammunition.

A spokesperson for Google-owned YouTube told Euronews Next in a statement that "the video in question has been removed after we received a valid privacy complaint".

In the 44-minute video published on the video sharing platform on Tuesday, a handcuffed Aslin is questioned by Graham Phillips, a British blogger who has previously freelanced for the Russian state-backed broadcaster RT and Russian defence ministry-run Zvezda.

Phillips begins the interview by stating that Aslin is not appearing under duress, which he confirms, saying "I wanted this".

While it is not possible to independently confirm how Aslin is being treated in captivity, his answers to Phillips's questions appeared to be at odds with his previous public statements on social media.

"The video of Aiden speaking under duress and having clearly suffered physical injuries is deeply distressing. Using images and videos of prisoners of war is in contravention of the Geneva Convention and must stop," Aslin's family said in a statement tweeted by their local member of parliament, Robert Jenrick.

As well as removing the video, YouTube also confirmed to Euronews Next that they had now indefinitely suspended monetisation on Phillips' channel for violating the platform's Creator Responsibility policy after the video was reported.

'Breach of the Geneva Conventions'

Aslin's family also refuted Russian claims that he had been fighting as a mercenary - claims repeated by Phillips in the video.

"In 2018, Aiden moved to Ukraine, where he met his girlfriend and eventually settled down in Mykolaiv. Aiden decided to join the Ukrainian marines and has served in his unit for nearly four years. He is not, contrary to the Kremlin’s propaganda, a volunteer, a mercenary or a spy," the family said.

A throw back to 2018 when we finished training our training and I took the outh to Defend the Ukrainian people and defend Ukraine. pic.twitter.com/8VL1hp3CmJ

Jenrick raised the video of Aslin during a session of Prime Minister's Questions in the UK parliament on Wednesday, saying he had been "interviewed under duress for propaganda purposes".

"Does [the prime minister] agree that that is a flagrant breach of the Geneva convention, that treating any prisoner of war in that manner is illegal, that the interviewer - Graham Phillips - is in danger of prosecution for war crimes and that any online platform such as YouTube that hosts propaganda videos of that kind should take them down immediately?" the MP asked.

In an emailed response to Euronews Next on Friday, Phillips defended the video and said he had "nothing to hide," adding that Aslin had "requested the interview".

"Let anyone serious present any real charges against me, and I'll fully answer all of them - I'm an independent journalist of complete integrity, and absolutely sound of conscience and ethics," he said.

Guidance from the UK government and British Red Cross published in 2007 recommends that images of PoWs "should not be transmitted, published or broadcast," on the basis of Article 13 of the Third Geneva Convention, which protects prisoners against "acts of violence or intimidation and against insults and public curiosity".

"Whilst pictures or video of prisoners of war are an important part of the story of the Russian invasion of Ukraine, journalists should ensure that individual prisoners are not identifiable in pictures or videos and that if necessary, faces, badges or other identifying symbols should be pixelated to protect the identity of individuals," Professor Chris Frost, chair of the NUJ’s Ethics Council said.

Phillips was previously criticised for interviewing PoWs in 2014, when he spoke to Ukrainian troops captured after Russia's invasion of Crimea. A video of the encounter posted to YouTube was later removed.

@GrahamWP_UK Graham, you know I try to resist criticising you all the time. But you cannot interview prisoners of war. Unethical and illegal

Before removing the video on Saturday, a YouTube spokesperson had earlier said that any video found to violate its policies would be removed from the platform.

"We take safety on YouTube very seriously and have strict Community Guidelines that apply to videos and comments alike. Any flagged content found to violate our policies is removed from YouTube immediately. We are reviewing the video in question," they told Euronews Next on Thursday.

When Euronews Next reviewed the community guidelines highlighted by YouTube, it found they did not feature guidance on filming prisoners of war.

A section on misinformation did not mention war propaganda, only covering "dangerous remedies or cures," "suppression of census participation," "manipulated content," and "misattributed content".

Euronews Next asked YouTube if it believed its guidelines were fit for purpose in the context of the war in Ukraine, but the company did not immediately respond.

The video sharing platform has repeatedly been targeted by Russian authorities since the invasion of Ukraine began in February, as part of the Kremlin's attempts to tighten its grip over the spread of information.

On Thursday, a Moscow court fined YouTube for refusing to take down videos about the extent of Russian losses in the war.

Russia’s communications watchdog said earlier this month that it was taking steps to punish Google for "spreading fakes" on YouTube, and has previously warned the US company that it would be fined if it failed to comply, part of a wider battle with foreign tech firms that has seen Facebook, Instagram, and Twitter banned in Russia.

Could Russia's frozen assets cover the rebuilding of war-torn Ukraine?