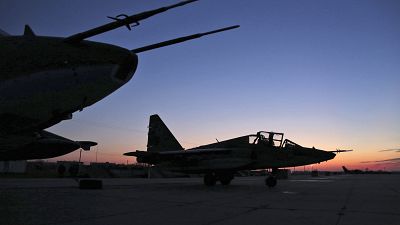 A viral social media campaign leading with the hashtag #buymeafighterjet appears to be an attempt by the Ukrainian air force to get hold of fighter jets to defend its skies form Russian invaders.

Ukraine has been asking for a NATO no-fly zone over its skies, or for fighter jets to protect itself with, since Russia’s invasion of the country in February.

Ukrainian president Volodymyr Zelenskyy beseeched the West once again last week to provide his country with the heavy weaponry it needs to defeat Russia, with fighter jets a crucial part of that inventory.

But so far, Ukraine’s allies have not sent the fighter jets.

‘One plane can save thousands of innocent lives’

A campaign, apparently launched on April 12, is calling on wealthy philanthropists to bypass the political conundrum facing governments, and buy fighter jets themselves for the Ukrainian military.

The campaign consists of social media posts and a website, buymeafighterjet.com, with Ukrainian and English language options.

“Every day we see atrocious war crimes - bombing and shelling of residential buildings, schools, hospitals and kindergartens,” says an unidentified man in the accompanying YouTube video, who appears to be wearing Ukrainian air force uniform.

“Whoever you are – a businessman, an IT specialist, an actor or a singer, whichever nationality you are or country you live in - you can help us to stop the terror” he continues, as he walks around the wreckage of fighter jets on the ground.

“The estimated average cost of one plane is $25 million [€23 million]. One plane can save thousands of innocent lives. Help us protect our loved ones. Our pilots, who right now are courageously fighting the invader, use the following types of aircraft:Su-22, Su-25, Su-27, Su-24, MiG-29.”

The website lists available aircraft and their locations, in countries including European neighbours Poland, Slovakia and Bulgaria, but also as far afield as Chad and Eritrea.

The fighter jet campaign is just the latest in Ukraine’s savvy use of the modern digital landscape to raise funds and get ahead in the information war.

That has officially raised more than €55 million so far, although the actual figure is likely to be much higher.

The Ukrainian government has already spent at least €30 million of that on bullet-proof vests, night vision goggles, helmets, medicine and food supplies, according to the country’s Deputy Minister of Digital Transformation, Alex Bornyakov.

"Now we're considering helping our government buy armoured vehicles, to get people back and forth because there's a high probability of getting hit and we need armoured vehicles," he told Euronews Next in an interview in March.

On the government’s official crypto donation site, donors can give coins including Bitcoin, Ethereum, Solana and Polkadot, as well as donating NFTs.

Appeal against Meta's ban for 'extremism' launched in a Russian court