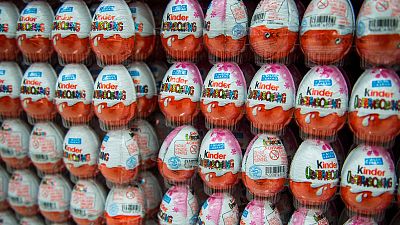 European health agencies have called for further investigation into the Kinder chocolate factory in Arlon linked to an outbreak of salmonella across Europe.

All products from the Arlon plant in the north of the country were recalled on April 8, following a spate of cases in ten European countries.

Belgian authorities ordered production at the site to be suspended, criticising it for a lack of transparency.

The European Centre for Disease Prevention and Control (ECDC) and the European Food Safety Authority (EFSA) said as of April 8, 150 cases of confirmed or probable salmonella poisoning have been detected, with most cases in children under the age of 10.

ECDC experts said “further investigations are needed at the production site in Arlon, to identify the root cause, timing, and possible factors behind the contamination”.

The warnings for the Kinder products came amid other food recalls in Europe.

Buitoni, owned by Nestlé, recalled its entire range of Fraîch'Up frozen pizzas due to links to E.coli on March 18, while Lactalis recalled tens of thousands of its cheeses, after they were suspected of carrying the listeria bacteria.

What happened at Kinder’s plant in Arlon?

Kinder, owned by the Italian company Ferrero, detected Salmonella Typhimurium in a buttermilk tank at the Arlon site during the manufacturer’s own checks in December 2021, according to the ECDC.

The company “implemented some hygiene measures and increased sampling and testing of the products and the processing environment,” the ECDC statement continued.

After the samples reportedly came back negative for salmonella, Kinder distributed the products across Europe and beyond.

The first cases of salmonella linked to the chocolate were in the UK in January. After more cases were discovered and linked to batches from the Arlon plant, from April 2 health warnings were issued by national authorities, along with a recall notice for specific products.

On April 8, Belgium ordered a halt to production at Kinder's factory in Arlon and all Kinder products that were manufactured there were recalled.

The Belgian foods safety agency FASFC said in a statement at the time: "After investigations (...) and following the findings of the last few hours that the information provided by Ferrero is incomplete, the Agency is today withdrawing the authorisation of the Ferrero production plant in Arlon".

As of April 8, there have been at least 150 cases of confirmed or suspected salmonella linked to the Kinder products, in Belgium, France, Germany, Ireland, Luxembourg, the Netherlands, Norway, Spain, Sweden and the UK.

Ferrero apologised to consumers in a statement, acknowledging "there were internal inefficiencies, creating delays in retrieving and sharing information in a timely manner".

"We will take every step necessary to preserve the full trust and confidence of our consumers," the company said.

A recall campaign was also launched for 24,000 cheeses in Lactalis's Fromageries de Normandie range, made in France, due to a risk of listeriosis - a potentially serious infection caused by listeria bacteria.

On April 8, a recall that was initially focused on two types of raw milk cheese was extended to more brands linked to a "probable source of contamination" at a partner farm that produces raw milk.

The cheeses in question have been sold in supermarkets throughout France since mid-March.

The Paris prosecutor's office opened an investigation into the outbreak after dozens of cases of people falling ill were linked to the pizzas. It will look into "involuntary manslaughter", "deception" and "endangering others".

Two children have died, although the link with pizza has not been confirmed in either case.

What does this say about food safety in Europe?

Foodwatch, an NGO advocating for food safety, said the product recalls underscore "a failing consumer protection system that urgently needs to be reformed”.

Ingrid Kragl, the founder of Foodwatch in France, said the cases show that "manufacturers cannot be trusted” with a system that largely relies on self-monitoring.

Camille Perrin, a senior food policy officer at the European consumer protection group BEUC, said the problem doesn't lie in EU regulations, but in a lack of enforcement by member states.

EU food safety regulations are “among the strictest in the world,” Perrin told Euronews Next.

"What we see is the budget for controls in the majority of European countries has declined".

BEUC had already sounded the alarm in 2019 over the drop in food safety checks by member states.

According to Foodwatch, there are now 442 fewer agents in France's directorate for consumer affairs and fraud control than 10 years ago, while food safety inspections carried out by government officials have fallen by 33 per cent between 2012 and 2019.