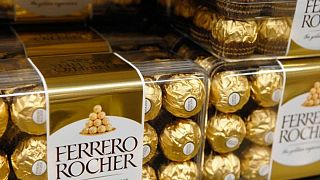 Turkey’s competition authority has launched a legal investigation into Italian company Ferrero on charges of monopolizing the hazelnut market.

In a preliminary phase, the authority found evidence serious enough for opening an investigation into Ferrero, an Italian multinational headquartered in Luxembourg and the world’s second-biggest chocolate producer and confectionery company.

Ferrero employs more than 1,000 people in Turkey, where it has been sourcing hazelnuts across the agriculture-rich country’s Black Sea regions for over three decades.

But the company - Turkey’s top hazelnut buyer especially for its world-famous Nutella spread - has angered Turkish farmers, who accuse Ferrero of paying meagre sums to them for hazelnuts and then selling its products at significantly higher prices.

“We started our legal process with the competition authority in September against Italian company Ferrero, which is trying to monopolize the hazelnut industry,” Hilmi Güler, mayor of the Black Sea province of Ordu, whose economy is mostly based on revenues from hazelnuts, tweeted.

“An investigation has been launched due to the company’s actions at all levels, from production to purchasing, shelling and export,” he said.

Turkey is the world’s leading hazelnut producer, accounting for around 70 percent of the total world supply. The country exported 344,379 tons of hazelnuts to 122 countries in 2021, according to the Black Sea Hazelnut and Hazelnut Products Exporters' Union.