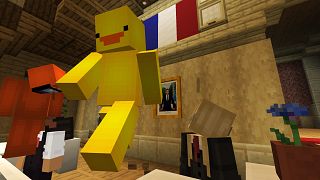 I visited the Macronverse to see if it was the future of political campaigning   -   Copyright  Minecraft
By Tom Bateman  •  Updated: 31/03/2022

It's election season in France, and posters of the incumbent President Emmanuel Macron gaze down on a picturesque small town with its post office, police station, cinema and kebab shop nestled on the banks of a gently flowing river.

The town isn't real though. This is all happening in Minecraft, the blocky sandbox game that has captured the imagination of millions since it was first released in 2011.

As part of his drive for re-election, Macron’s campaign has created its own official Minecraft server for potential voters (and curious British journalists) to visit.

But what does an election in the world of Minecraft look like?

Coming from a president who launched his re-election campaign with a call for the creation of "a European metaverse" as a way for France's digital industry to reduce its dependence on Big Tech's "Anglo-Saxon or Chinese" players, I was curious to find out.

Here's what I saw.

Visitors to what some French journalists have already termed the "Macronverse" arrive in a town square with a fountain, a handful of cafes and an enormous billboard with a photo of the man himself advertising a campaign event.

I wasn't alone. The town square was quite busy, with other visitors running, jumping and punching each other (and sometimes also the giant poster of Macron).

Interaction is limited though. There's no way to communicate with other players, other than by jumping, crouching and punching. The same goes for most of the non-player controlled (NPC) residents of the Minecraft town, except for the select few with a name in orange floating above their heads.

When approached, they'll happily tell you about how the number of police has increased, how the government has kept the price of fuel in check, or how they've benefitted from electric vehicle subsidies.

This seems to imply that these boxy NPCs all currently live in France, where they drive to work at a variety of public-sector jobs.

I have many questions, but there's no way for me to ask them as these automated conversations are one-sided. You don't get a chance to respond to - or challenge - what is being said.

Across town, past the kebab shop and over the bridge, lie the Macron campaign headquarters. Here, inside the modernist building made from the Minecraft equivalents of - I guess - wood and glass, reality blurs even further.

There's no Minecraft Macron - presumably the man currently sat in the Élysée Palace is the only one in existence - but his photo adorns almost every surface.

On the top floor of the building sits an empty office draped in French flags, where you imagine Macron himself would sit if he were a) in the game and b) made entirely of blocks.

Elsewhere at the HQ, I find the only other kind of interaction waiting inside the Macronverse: clicking on links.

The town's single-screen cinema, meanwhile, contains a link to a short YouTube video of the French President promising "resolute action" if he's re-elected. Inside the town hall, a Minecraft official will point you towards a website where you can register to vote.

None of this should be surprising, of course. Macron's Minecraft server is built for electioneering, part of a broader effort to reach out to younger voters as the official campaign period of the French election gets underway.

But Minecraft has been used for a more interactive kind of political communication in the past.

During the 2020 presidential election in the United States, an initiative called "Build the Vote" created its own Minecraft version of the US Capitol building where visitors could cast their votes - not for candidates, but on policy issues including gun laws, criminal justice reform, healthcare access and climate change.

"By 'Minecraftising' the electoral process, we’re showing that video games and other platforms can become tools to serve bigger purposes, including our civic responsibilities," said David Allard, Associate Creative Director at Sid Lee, the agency that worked on the project.

Macron isn't the only one fighting this election from inside a video game.

"You're the only one that can change the rules of the game!" its developers announced.

Meanwhile, back in the president's Minecraft server, I fall off a bridge while trying to take a screenshot of the post office.

I can't see an easy way to get out of the river, which runs at the bottom of a deep gorge, so I decide to end my time in the Macronverse by drowning.

As for how effective a tool it is for somebody looking to get (re-)elected, we'll have to wait until the first round of voting starts on April 10 to find out.

France election: How do Macron and Le Pen plan to win over French tech

'Alternative' COVID cure ivermectin turns out not to work