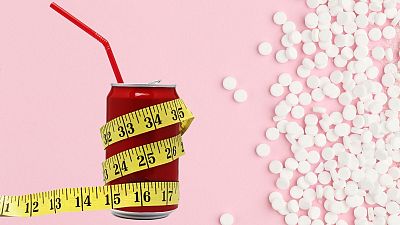 A new study has found a ‘possible link’ between artificial sweeteners and increased risk of cancer.   -   Copyright  Canva
By Natalie Huet  with AFP  •  Updated: 28/03/2022

It’s well known that too much sugar is bad for your health. But how wise it is to replace it with artificial sweeteners is also controversial.

The debate has been reignited by a large-scale, peer-reviewed study in France which has suggested consuming artificial sweeteners may increase the risk of developing cancer.

French researchers pored over the eating habits and health of more than 100,000 volunteers over the course of a decade.

The results of their statistical analyses, published last week in the journal PLOS Medicine, suggest that people who consumed the largest amounts of artificial sweeteners - especially aspartame and acesulfame-K, which are commonly used in soft drinks - were at increased risk of developing cancer, more specifically breast and obesity-related cancers.

“This large-scale, prospective study suggests that artificial sweeteners, used in many foods and beverages in France and throughout the world, may represent an increased risk factor for cancer,” Charlotte Debras, PhD student and lead author of the study, said in a statement.

She noted the findings were in line with past experimental studies suggesting a possible carcinogenic effect on rodents.

Across the European Union, their use is regulated by the European Food Safety Authority (EFSA). The agency is currently completing its re-evaluation of all food additives authorised for sale on the EU market, including artificial sweeteners, a spokesman for EFSA told Euronews Next.

“This new study will be taken into account as part of the re-evaluation,” the spokesman said.

Aspartame and an ‘increased risk’ of cancer

The researchers used data provided by 102,865 adults participating in France’s NutriNet-Santé cohort study between 2009 and 2021.

The volunteers self-reported their medical history, sociodemographic data and physical activity, as well as information on their lifestyle and health.

Over the course of the study, the volunteers gave details of their food intake by sending the scientists full records of what they consumed over several 24-hour periods, including the names and brands of the products.

It’s worth noting that 78.5 per cent of the study’s participants were women, 37 per cent of whom reported consuming artificial sweeteners.

"Aspartame intake was associated with increased breast and obesity-related cancers

Soft drinks accounted for more than half of their artificial sweetener intake, while table-top sweeteners represented 29 per cent and yoghurt or cottage cheese 8 per cent.

The researchers then compared consumption of these sweeteners to the rate of cancer in participants, while adjusting for other possible factors such as age, body mass index, smoking, poor diet, physical activity and family history of cancer.

The participants who consumed the largest amount of sweeteners had an increased cancer risk of 13 per cent compared to non-consumers, the study found.

However, the researchers clearly state that their findings do not establish a causal link between artificial sweeteners and cancer, and that further studies are needed.

“These results need to be replicated in other large-scale cohorts, and underlying mechanisms clarified by experimental studies,” they said.

Scientists who were not involved in the research have also greeted the findings with caution.

Dr Michael Jones, senior scientist in genetics and epidemiology at the Institute of Cancer Research in London, stressed that the current scientific consensus remains there is no clear evidence that artificial sweeteners cause cancer in humans, although food safety health authorities do frequently reassess the available evidence.

He explained that the types of people who use artificial sweeteners may be different in many ways to those who do not, and that “these differences may partly or fully explain the association”.

“The overall, inevitable, problem with the study is that it’s observational. The researchers didn’t make the participants eat particular things – they recorded what they ate over a period of time, and followed them up and recorded which people had a new cancer diagnosis,” he said.

The snag, he said, is that the three groups of people compared in the study “differed in many other ways than just their consumption of artificial sweeteners”.

The study indeed found that those who consumed more sweeteners tended to be more often women, to be younger, to smoke, and to be less physically active and more likely to have prevalent diabetes.

“Many of the associations between artificial sweetener consumption and cancer risk were still there after these adjustments. But one can never be confident that every relevant factor has been adjusted for,” McConway said.

The authors of the study themselves acknowledge these limitations but say their study should spark further investigations and debate.

“Our findings do not support the use of artificial sweeteners as safe alternatives for sugar in foods or beverages and provide important and novel information to address the controversies about their potential adverse health effects,” they concluded.

Aphasia: What we know about the brain condition affecting Bruce Willis