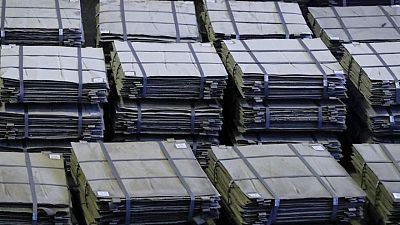 LONDON – Nickel prices lurched higher to hit their daily limits in London and China on Thursday with the large moves fuelled by thin trading conditions.

Industrial metals have rallied as disruptions from the Russia-Ukraine conflict and higher energy costs triggered concerns over global supply.

Efforts by major Chinese nickel producer Tsingshan Holding Group to reduce its short positions spurred LME nickel prices to rocket to record highs above $100,000 a tonne on March 8, after which trading was suspended for six sessions.

One trader said the dominant short position remained, although it was unclear whether Tsingshan was back in the market seeking to cover some of its short position.

He added that an illiquid market would make such efforts harder and could be driving the sharp gains.

Tshinghan could not immediately be contacted for comment outside of Asian business hours.

On March 14, the company said it had reached a standstill agreement with banks under which they will not make margin calls on or close out the producer’s nickel positions.

Benchmark nickel on the London Metal Exchange jumped by its daily price limit of 15% in early Thursday trade to $37,325 a tonne and was holding at the level at midday.

The LME, owned by Hong Kong Exchanges and Clearing, has delayed the opening of nickel trading until 0800 GMT and imposed trading limits for the first time after prices spiked on March 8.

LME benchmark nickel slumped for several days in very low volumes and repeatedly hit its lower trading limits after trade resumed last week after a break to calm the market.

During that period, traders said LME nickel was moving lower towards levels in Shanghai.

LME volumes have picked up on the world’s top nickel trading venue since Tuesday, suggesting the market is starting to return to normal after two weeks of chaos.

Russia not only supplies about 10% of the world’s nickel but Russia’s Nornickel is the world’s biggest supplier of battery- grade nickel at 15%-20% of global supply, said JPMorgan analyst Dominic O’Kane.