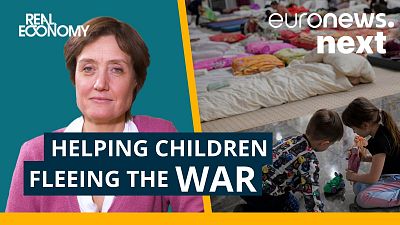 More than 3.6 million refugees have now fled Ukraine since Russia's invasion a month ago, according to the latest data.

Amongst them, 1.5 million children have fled in total, averaging out at 73,000 each day since the invasion began on February 24th, according to the UN's International Organization for Migration.

"A Ukrainian child has become a refugee almost every single second since the start of the war,” said UNICEF Spokesperson James in a press briefing on March 15th at the Palais des Nations in Geneva.

"This refugee crisis is, in terms of speed and scale, unprecedented since the Second World War.”

Many organisations have been calling for immediate humanitarian support to ensure that the children’s basic needs are met - food, shelter, health - as well as humanitarian corridors to bring them and their families to safety in neighbouring countries.

Eurochild’s Secretary-General Jana Hainsworth told Euronews what support is needed for families and children once they cross the border and find refuge in another country.

Give the children a safe home to grow in

“[Refugee] children need to get some semblance of normality into their lives as soon as possible,” Hainsworth said, adding that going to school, eating well, and being protected and supported within their families is necessary.

“We're seeing an overwhelming number of children with their families, but also children who are unaccompanied moving into the European Union,” she said.

Ukraine has one of the highest rates of children living in institutions, such as orphanages or boarding schools for orphans, in the world.

Before Russia’s February invasion, around 100,000 children, 1.3 per cent of children in Ukraine, were living in institutional care, according to Unicef.

Most of these children are now being evacuated to neighbouring countries, but they risk being exposed to violence, trafficked or exploited.

“For those children who are arriving unaccompanied, it's very important that we use all our potential to find families for those children to grow up in and that we don't place children in large institutional settings where children are extremely vulnerable to violence, to exploitation, to bullying and their lives will be devastated,” Hainsworth explained.

In a report published in 2015, Disability Rights International found that many children placed in institutional care in Ukraine faced forced labour, violence and sexual abuse.

“Most of these children have experienced huge trauma, from the war but also from their lives in institutional care,” she said.

Improve existing structures to cope with the children’s trauma

To learn how to support children through this trauma, carers will need special training.

“It's really important that over the long term, we have the capacity in our child protection systems to ensure these children get the care that they deserve,” she said.

“We need to rethink how Europe is addressing child poverty, social inclusion of children, the services that are being promoted through the European Child Guarantee because this is creating a new need that needs to be integrated in the wider needs of Europe's children.”

The best way for children to integrate in their new countries will be through school, explained Hainsworth. But this also means that educational infrastructures will need to adapt and evolve to ensure the children can grow up in a safe environment.

“The way that we build peaceful societies is by ensuring that childhood is a safe space for every child,” she said.

Donate - if you can

One way to help now is by donating to the many humanitarian and children's organisations that are working on the ground to protect children.

“There are many organisations on the ground and there are opportunities or channels to provide donations to these organisations to enable them to reach the children in need and support the families arriving in the border countries,” said Hainsworth.

You can donate to the following organisations:

To find out more, watch the video above.

How is the European Child Guarantee initiative fighting child poverty?