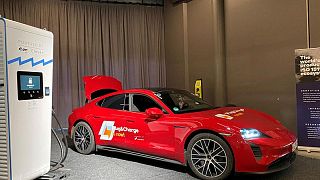 More than 80 per cent of newly sold Porsche vehicles will be fully-electric in 2030, Porsche's chief executive officer Oliver Blume said at the group's annual press conference on Friday.

"The future of Porsche is electric," Blume said during a media roundtable.

The Taycan is Porsche’s first and only all-electric car so far but the German company's next two EVs are expected to be the Macan SUV in 2023 and in 2025 the 718 sports car.

The future of Porsche is electric.

Blume said a hybrid version of its 911 sports car is in the workd but did not disclose when it would be released.

Porsche AG also stuck to its long-term target of an operating margin of at least 15 per cent, finance chief Lutz Meschke said.

Volkswagen and its top shareholder Porsche SE struck a framework agreement for a potential partial listing of Porsche AG, which could value the division at up to 90 billion euros.

Such a listing would include listing up to 25 per cent of Porsche AG's preferred stock, selling 25 per cent plus 1 ordinary share in the carmaker to Porsche SE and paying out 49 per cent of IPO proceeds to Volkswagen's shareholders as a special dividend.