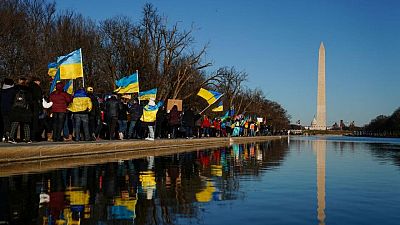 – Ukraine’s government is lobbying the Biden administration to cut Russia off from U.S. software updates, to ban Russian flights, and to block the supply of goods to Russia’s civil aviation industry in an effort to rally support for drastic sanctions while the Kremlin pushes deeper into Ukrainian territory.

The demands, which a Ukrainian diplomat in Washington circulated on Thursday in a brief 14-point memo to American officials, go beyond export control measures promised by the White House, which has vowed to spare Russian consumers from the brunt of sanctions.

The Ukrainians asked their American counterparts to bar U.S. companies from “supplying and updating software in the interests of Russian consumers” or from supplying U.S. telecommunications products, including microelectronics, to Russia. In addition, the Ukrainians called on the United States to bar the supply of goods and technologies, including software for use in the Russian aviation industry, including civil aviation.

Reuters reported on Tuesday that the Biden administration was working on a plan to cut Russia off from a vast swath of low- and high-tech U.S. and foreign-made goods, from commercial electronics and computers to semiconductors and aircraft parts.

The U.S. Commerce Department did not immediately respond to a request for comment. There was no immediate comment from the U.S. Treasury Department or White House.

Some of the demands made by the Ukrainian government have already been made public. On Twitter, Ukrainian Foreign Minister Dmytro Kuleba said the world should impose “devastating sanctions on Russia NOW,” including disconnecting the country from the SWIFT financial transaction network.

Some of the suggested actions in the 14-point memo, such as “expelling Russian ambassadors worldwide” and “removing Russia from UN Security Council,” were unlikely to be implemented. Others, such as the ban on the supply of “any goods, including hardware and software” to Russia’s oil, gas, coal, mining, and nuclear sectors, would also be tall orders.

Late on Wednesday, President Joe Biden said the United States and its allies would impose severe sanctions on Russia after its military forces launched an attack on Ukraine, engaging in battle around nearly all of the country’s perimeter.