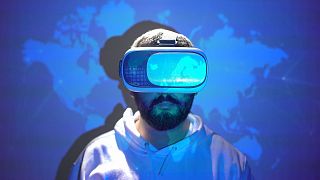 The way we act, live and shop in virtual reality is already giving regulators a headache even before the metaverse has truly taken off.   -   Copyright  Canva
By Pascale Davies  •  Updated: 18/02/2022

As technology companies race to make their mark on the metaverse, an industry that is predicted to create a market opportunity of $1tn (€880 billion) per year, the virtual realm has already become a legal minefield.

The metaverse has been heralded as the next version of the Internet but unlike its predecessor, avatars would represent us in this cyberspace, usually with augmented reality (AR) or virtual reality (VR) through the use of headsets and goggles.

However, the way we act, live and shop in virtual reality is already giving regulators a headache even before the metaverse has truly taken off.

Here are three of the main legal areas that may prove tricky to regulate.

How we act and work in the digital world

Reports of avatar-groping and even digital gang rape in the metaverse have already surfaced but how virtual assault is tried is murky territory.

In the virtual world, proving assault and harassment may be difficult as most countries’ laws require actual physical harm in real life.

Is the employer vicariously liable for their employee's actions in the metaverse? The short answer is no one probably knows with any certainty at the moment.

Of course, online harassment is nothing new and how it is regulated now is likely to translate into the metaverse, said Tom Harding, head of Osborne Clarke UK's Games & Interactive entertainment practice.

“I work a lot in the games sector, and there have been analogous instances of people harassing others in games, which has led to liability, so the natural conclusion is that the concept could transfer into the metaverse,” he told Euronews Next.

However, as the metaverse will not just be used for gaming and socialising but also for work, virtual harassment may need to be taken more seriously.

“There are so many issues that could crop up, say for example something happens with a nasty user interaction whilst in the metaverse at work,” Harding said.

“Is the employer vicariously liable for their employee's actions in the metaverse? The short answer is no one probably knows with any certainty at the moment”.

As the metaverse evolves, employers may have to think about how their bullying and anti-harassment policies operate in practice and how they would work in the metaverse.

Who can access our data and how will it be used?

In using headsets, googles and other devices to access the metaverse, we are bringing devices into our homes that can record our facial expressions and gestures, which poses questions on how our data will be kept safe.

As companies such as Meta, Nike and even Walmart expand into the metaverse questions of how they will use our data is unclear.

Europe’s General Data Protection Regulation (GDPR), which was designed to give greater data protection to users and clarified how companies use information, could be translated into the metaverse.

While the EU’s GDPR was brought in to also unify data laws across the European Union, exactly who - if anyone - will regulate the metaverse is another question entirely.

"To try and apply current laws to the metaverse context is going to be a significant challenge. From a regulatory perspective, you're never going to have a single 'metaverse law' that tries to cover everything, in the same way, there is no one-stop single 'internet law', because that just doesn't make any sense,” said Harding.

How you can apply and develop a suitable regulatory environment based on the current framework is what people are trying to get their heads around, he added.

“Building it will undoubtedly come first, which will still be technically challenging, and it will then also develop as things move along. But how it's actually then governed is going to be the big legal challenge”.

As the metaverse is solely a virtual world, from a legal standpoint this will conflict with real world intellectual property rights which are inherently territorial.

"There's been a body of case law that has been developed over time to try and connect IP infringement in the online world to the real world. This legal principle is commonly called targeting,” said Nick Kempton, IP and video games lawyer at Osborne Clarke.

“But there are criteria, at least under UK/EU rules, to establish 'where' the infringement is happening and certain facts and indicators, such as currency or a website domain, may not even be present in a metaverse".

With the surge in NFTs and people using them to purchase land, property or even clothing in the metaverse, and building their virtual worlds and content, there will be many issues around ownership and how it is tracked.

This is especially true as there is more than one metaverse, so bringing items purchased or created in one virtual world to another will also cause intellectual property (IP) issues.

“From an IP angle, I think at a high level the main sort of issues that really come into play will be around territoriality because the metaverse is territorially agnostic and intangible,” Kempton said.