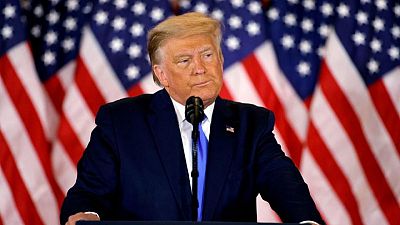 The testing of Truth Social comes a year after Trump was banned from Facebook, Twitter and YouTube after he voiced support for rioters who stormed the US Capitol. Twitter said at the time: "We have permanently suspended the account due to the risk of further incitement of violence".

His new media and technology venture, Trump Media & Technology Group (TMTG), has pledged to deliver an "engaging and censorship-free experience" on the app, which Chief Executive Devin Nunes has said will launch by the end of March.

TMTG remains shrouded in secrecy and is regarded with scepticism by some in tech and media circles. It remains unclear whether the app's goal of freedom of expression can co-exist with Apple's and Google's app store policies. TMTG was not immediately available to comment.

Liz Willis, a correspondent and vice president of operations at Right Side Broadcasting Network, told Reuters she received an email Tuesday stating that "T Media Tech LLC has invited you to test Truth Social".

Willis was able to download the app on her iPhone through the beta testing site TestFlight, the Apple-owned product that developers use prior to launching their apps in the App Store. Users have been posting on this version of Truth Social for the past 24 hours, Willis said on Wednesday morning.

TRUTH Social (beta) has dropped and President Trump is active on his own account!

The world is healing. ?? pic.twitter.com/58klKutxay

Wayne Dupree, host of a conservative podcast, is also among the app's beta testers.

"I can see my participation in Truth Social outgrowing Twitter because it seems I am not suppressed like I have been on Twitter, since 2016," said Dupree, who added there was currently no edit button.

"I want to share my single dad chronicles. I want my followers to see I am more than politics and I feel Truth Social is going to allow my audience to see me as Twitter purposely does not".

Twitter has repeatedly denied its platform is politically biased.

By late Wednesday, Trump's account on Truth Social had 317 followers, according to a screenshot viewed by Reuters. Trump had 88 million followers before Twitter banned him.

Truth Social allows users to post and share a "truth" the same way they would do so with a tweet. There are no ads, according to Willis and a second source familiar with TMTG.

Users choose who they follow and the feed is a mix of individual posts and an RSS-like news feed. They will be alerted if someone mentions or begins following them.

According to a screenshot, the app says that "A new direct messaging experience will be available soon. Please stay tuned".

Several conservative media personalities also have accounts, according to a screenshot reviewed by Reuters. Reuters could not immediately reach those individuals for comment.

Trump’s account shows one "truth" that he posted three days ago, verified at the account of @realDonaldTrump with a red check and with the message: "Get Ready! Your favorite President will see you soon!"

TMTG released an updated version, "Truth Social 0.9," Wednesday morning. It is testing for bug fixes for “re-truths,” which is what it calls a retweet, “image aspect ratios and compression, improved error handling and account creation”.

On Wednesday morning Nunes, who joined the app on February 10, posted: "Good morning Truth testers. Please screenshot any bugs when the screenshot preview comes up".

If a tester sees anything that they don't like, they can screenshot it and report it to the developers.

A message says: "Beta feedback and device information is collected and shared with the developer and it will be linked to your email address".