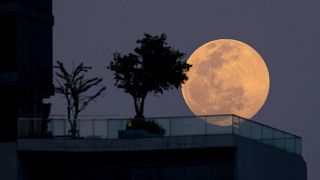 A part of a rocket that is expected to crash into the Moon in March may be a booster from a Chinese launch and not from a spacecraft belonging to Elon Musk’s SpaceX as previously thought, an astronomer has said.

In January, the astronomer Bill Gray said in his blog Project Pluto that a booster that had been floating around for seven years from a SpaceX Falcon 9 rocket was likely to hit the Moon.

However, last week he updated his blog post to say evidence now shows that the object was actually a rocket booster from China's Chang'e 5-T1 mission, which launched in 2014.

He made the change after he received an email from NASA Jet Propulsion Laboratory (JPL) engineer, Jon Giorgini, who tracks active spacecraft.

Giorgini inquired about his original blog post and pointed out JPL's Horizons system showed that SpaceX’s DSCOVR spacecraft's trajectory did not go particularly close to the Moon.

Gray researched to see if there were any other past launches that could be the object and he found the booster from China's Chang'e 5-T1 mission was the most likely suspect.

"In a sense, this remains 'circumstantial' evidence. But I would regard it as fairly convincing evidence," Gray wrote. "So I am persuaded that the object about to hit the Moon on 2022 Mar 4 at 12:25 UTC is actually the Chang'e 5-T1 rocket stage".

Regardless of where the space object comes from, it is predicted to collide with the Moon on March 4.

But the scientific community has not raised any concerns as the Moon lacks an atmosphere to shield it from space debris and therefore often accumulates naturally occurring impact craters.

NASA has called the event an “exciting research opportunity” and that it will attempt to observe the crater that will be formed by the explosion of this object with its Lunar Reconnaissance Orbiter (LRO) probe.

Where is the SpaceX booster?

Concerns over space debris have risen in recent months with calls for better space tracking increasing, particularly over SpaceX.

But Gray does not know where the SpaceX booster is.

"I wish I had a good answer (to where it is). But I strongly suspect that nobody does," he wrote in his blog post.

"I don't think SpaceX knows. If they did, they could have raised their hand in the last couple of weeks and said, 'That's not our rocket stage hitting the Moon'.

"This is not proof - SpaceX is, I gather, notably uncommunicative - but given how much grief they were getting, you'd think they would have pointed this out. For that matter, I don't know how well China tracks its leftover rockets".