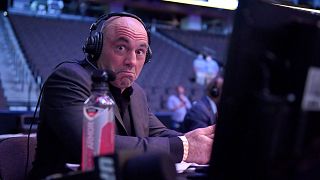 Joe Rogan's podcast is one of the most popular in the world, but it has often strayed into controversial territory   -   Copyright  Douglas P. DeFelice / GETTY IMAGES NORTH AMERICA / AFP
By Tom Bateman  with AP  •  Updated: 07/02/2022

"While I strongly condemn what Joe has said and I agree with his decision to remove past episodes from our platform, I realise some will want more. And I want to make one point very clear – I do not believe that silencing Joe is the answer," he wrote in an email to Spotify employees.

"We should have clear lines around content and take action when they are crossed, but cancelling voices is a slippery slope".

Ek said Rogan "chose to remove a number of episodes" of the Joe Rogan Experience (JRE) podcast after discussing issues "including his history of using some racially insensitive language," with Spotify.

Rogan apologised on Saturday, saying that the slurs were the "most regretful and shameful thing" he has ever had to address and that he hasn’t used the N-word in years.

Ek also reiterated a claim he made at a company meeting last week that Spotify is not a publisher, and is therefore not editorially responsible for the content of the podcast.

"In last week’s Town Hall, I outlined to you that we are not the publisher of JRE. But perception due to our exclusive licence implies otherwise," he wrote.

No creative control over Rogan

"It is important to note that we do not have creative control over Joe Rogan’s content. We don’t approve his guest in advance, and just like any other creator, we get his content when he publishes, and then we review it," Ek said at the February 3 meeting.

Malone's episode of JRE sparked outrage among musicians Neil Young, Joni Mitchell and Nils Lofgren, who pulled their music from Spotify in protest.

Erik Gordon, a University of Michigan business and law professor, told the AP that conflict between Rogan - by many estimates the world's most popular podcaster - and the musicians who provide the bulk of Spotify's content, put the streaming service in a challenging business position.

"They can’t blow off the artists. The artists make Spotify," Gordon said. "They need to settle up with Rogan, let him go to a home that will be consistent with who he is. And everybody will be better off".

#DeleteFacebook: Why are users being called on to ditch it?

Can you put a price on Elon Musk’s freedom? This teen has