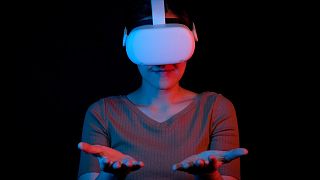 Sexual assault and harassment in the metaverse is a growing concern.   -   Copyright  Canva
By Euronews and Reuters  •  Updated: 06/02/2022

"Don’t pretend you didn’t love it," said one of Nina Jane Patel's attackers after sexually assaulting her. Unlike the more typical reports of aggravated assaults on women, this didn't happen in real life; it took place in the metaverse.

One of the test users of Facebook's new virtual universe, Patel claimed that as soon as she entered the programme, she was gang-raped by men.

On Friday, Facebook's parent Meta Platforms said it is launching a tool for people using its virtual reality social platforms to maintain personal space boundaries, as concerns have mounted about user safety and sexual harassment.

Its new "personal boundary" tool will make users feel like they have nearly 1.2 metres between their virtual avatar and others when they access the immersive Horizon Worlds and Horizon Venues apps through VR headsets.

The company said in a blog post that this new default setting would make it easier to avoid unwanted interactions. The change comes as users of VR platforms including Horizon Worlds have raised alarms about virtual groping and other abusive behaviour.

The development comes too late for people like Patel whose experience has prompted the changes.

'A horrible experience... I froze'

"My experience of sexual harassment was, to say the least, shocking. Shocking because I am not accustomed to be spoken to in such derogatory ways, maybe back in 1996, but certainly not in 2021," she wrote in a post on Medium in December.

"A horrible experience that happened so fast and before I could even think about putting the safety barrier in place. I froze".

Patel stated that the virtual environment offers traumatic experiences even for test users. Describing her experiences, Patel stated that within 60 seconds of entering Meta, she was verbally abused by men, gang raped by other avatars, and photographed.

"When I asked to take a break, they shouted, 'Don't act like you don't like it.' It was a surreal nightmare," Patel said.

Emphasising that virtual reality was basically designed on the inability of the mind and body to understand the difference between real and virtual experiences, Patel said, "In a sense, my physiological and psychological reaction was that it was like in real life".

Meta has long been under scrutiny from global lawmakers and regulators over its handling of problematic content and abuses on its existing social media platforms such as Facebook and Instagram.

Shares of Meta, which is pouring billions of dollars into its metaverse ambitions, plummeted 26 per cent on Thursday in the biggest single-day slide in market value for a US company, after the social media giant issued a dismal forecast, blaming Apple Inc's privacy changes and increased competition.

Meta said the new tool built on its current "hand harassment measures," where an avatar's hands would disappear if they invaded someone's personal space. It also currently has a "Safe Zone" feature where people can activate a bubble around their avatar if they feel threatened.

"It's an important step, and there's still much more work to be done. We'll continue to test and explore new ways to help people feel comfortable in VR," said Sharma.

He said in the future, Meta would look at the possibility of adding in controls like letting people change the size of their personal boundary.

For now, the company noted users will have to "extend their arms to be able to high-five or fist bump other people's avatars".

#DeleteFacebook: Why are users being called on to ditch it?

Energy crisis in Europe: How are countries dealing with soaring bills?