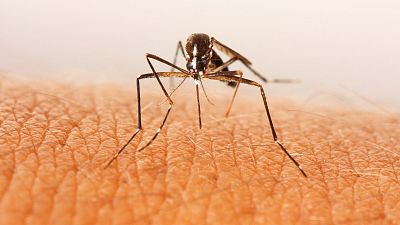 Scientists in Sweden have developed a method of targeting and killing mosquitoes that they say could be a scalable, cheaper way of controlling the insects without negatively impacting entire ecosystems like mass pesticides.

The key to this process is a synthetic "blood" created from a molecule in the malaria parasite that attracts the mosquito, beetroot juice and toxins to kill the insect.

Vector-borne diseases kill over 700,000 people each year, according to the World Health Organization (WHO), with over half of those deaths caused by malaria carried by Anopheline mosquitoes.

According to Dr Lech Ignatowicz, CEO of Molecular Attraction, the widespread use of pesticides to control mosquitoes harms biodiversity by killing all forms of insects and life instead of targeting mosquitoes directly.

Pesticides are killing every single insect they come in contact with. Here... we can pick the ones which we want to get rid of, and target those.

This is where their innovative synthetic 'blood' comes into play.

"I usually try to avoid any weapon kind of analogy but here, instead of just carpet bombing, this is more like a smart bomb that is directed into one particular target," Dr Lech explained.

Dr Noushin Emami, a co-founder of the health tech start-up alongside of Ignatowicz, discovered that mosquitoes are attracted to a chemical called HMBPP made by the malaria parasite which she described to Scientific American as being equivalent to a "bloody, hot, juicy steak for the mosquitoes".

By mixing the molecule from the malaria parasite with beetroot juice and toxins, they claim to have produced a cheap, alternative pesticide that targets only mosquitoes.

"Pesticides are killing every single insect they come in contact with," Lech said.

"Here, even in very dense environments, especially in the jungle or the tropics where you have a lot of insects, we can pick the ones which we want to get rid of, and target those. And leave alone the rest of the ecosystem. So that's the biggest advantage from the ecological point of view," he added.

These are the tech trends to watch out for in 2022