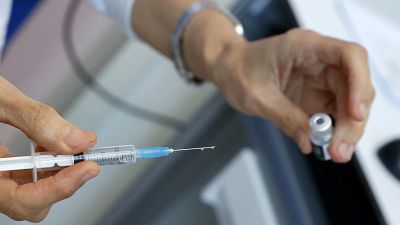 The first case of a person infected with  COVID-19 and influenza at the same time has been recorded in Israel, with the term 'flurona' being coined as a result.

Local reports said the patient was a young pregnant woman who was in hospital but had mild symptoms.

Israel’s health ministry is studying this unprecedented case with the idea of ​​being able to confirm that the combination of these two viruses does not cause a more serious infection.

"She was diagnosed with the flu and coronavirus as soon as she arrived. Both tests came back positive, even after we checked again," said Arnon Vizhnitser, director of the gynaecology department of Beilinson Hospital in Petah Tikva city.

"The disease is the same disease; they’re viral and cause difficulty breathing since both attack the upper respiratory tract," he told the Hamodia newspaper.

The publication said she was not vaccinated against COVID-19 or influenza. The woman was released on Thursday from the hospital, which said she was in good condition.

What do we know so far about Flurona?

For the moment, we know very little about flurona.

Euronews Next contacted the European Centre for Disease Prevention and Control for comment. The agency said it was not currently collecting any data on co-infection of influenza and COVID-19.

The World Health Organization (WHO) has not commented on 'flurona' either. The UN agency classifies flu and COVID-19 as respiratory diseases and says they can cause similar symptoms such as a cough, runny nose, sore throat, fever, headache and fatigue.

Israel’s health ministry is studying the flurona case to see if the combination of the two viruses causes more severe illness.

The ministry said on Wednesday that it had charted a worrying rise in flu cases.

Last week, a 31-year-old pregnant woman died from complications of influenza when she was nine months pregnant. Her son, delivered via Caesarean section, survived.

"Last year, we did not witness flu cases among pregnant or birthing women," said Vizhnitser.

"Today, we are seeing cases of both coronavirus and the flu that are starting to rear their head".

Israel, like the rest of the world, is also seeing an alarming rise in Omicron cases, the new COVID-19 variant.

Last week, the head of the army’s coronavirus task force warned that the healthcare system would "collapse" as Omicron spread, according to the Haaretz newspaper.

Prime minister Naftali Bennett said on Sunday that Israel would offer a fourth dose of the COVID-19 vaccine to people over 60 and to medical staff as it faces a surge in omicron variant infections.

"We now have a new layer of defence," he said in a televised news conference.

How will the COVID pandemic end in the wake of Omicron?