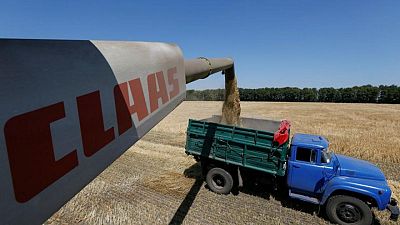 PARIS – Agricultural machinery maker Claas said on Thursday it expects difficulties in securing semiconductor chips to persist for the first half of next year, which could curb a surge in profits linked to booming farm demand.

An upturn in orders from farmers, who are benefiting from high crop prices after several lean years, has boosted earnings for equipment makers like U.S. giant Deere & Co.

Brisk farm machine demand has coincided with soaring costs of raw materials and supply chain disruption during the coronavirus pandemic, with a scarcity of electronic chips causing production snags, like in the car industry.

While steel prices appeared to have peaked, the supply squeeze in chips was not expected to ease until towards the end of 2022, German-based Claas said.

“It’s day and night work for our supply chain people,” Claas Chief Executive Thomas Bock said at a press conference in Paris. “It’s going to be a tough next six months with suppliers.”

Procurement efforts by an expanded supply chain team, including some use of air freight, enabled Claas to avoid factory shutdowns except for odd one- or two-day stoppages on some lines, he said.

The farm machine industry was also less exposed than car makers to component shortages because it produced much smaller numbers of vehicles, he added.

Claas expects its earnings to be slightly lower in 2022, after pre-tax profit more than doubled to 357 million euros in its 2021 financial year to Sept. 30.

December’s monthly survey by European farm machinery association CEMA showed that order levels were at record highs while nearly half of companies plan a temporary production halt in the month ahead.