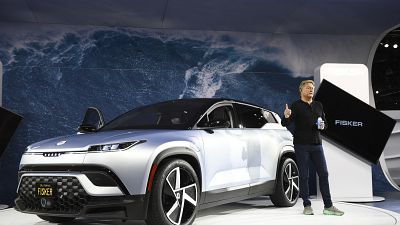 Henrik Fisker speaks about the Fisker Ocean electric vehicle after it is unveiled during AutoMobility LA ahead of the Los Angeles Auto Show on November 17, 2021 in Los Angeles   -   Copyright  PATRICK T. FALLON/AFP or licensors
By Julie Gaubert  •  Updated: 18/11/2021

When it comes to instigating a green car revolution, electric automaker Fisker is putting the wheels in motion to be more environmentally-conscious.

On Wednesday, the Dano-American carmaker’s chairman and CEO Henrik Fisker revealed what could be the "world’s most sustainable car" at the LA Auto Show.

"Our mission is to create the world’s most innovative and sustainable vehicles that are also affordable, and it all starts with the Fisker Ocean as we fully embrace a clean future for all," Fisker said at the event.

How sustainable is the Fisker Ocean?

Fisker said the Ocean has been designed to be "as sustainable as possible". What does that mean in practice?

Inside, the five-passenger car has a fully-vegan interior using recycled materials, including carpets made from reclaimed fishing nets and old t-shirts. The wheels are an alloy of renewed rubber complete with recycled material wheel covers.

"It’s an exciting part, that we can use recycling materials and actually create a luxury vehicle," Fisker said.

As for the batteries, the SUV is powered with a 80 kilowatt hour (kWh) battery pack using a lithium-ion phosphate (LFP) battery cell chemistry. It's supplied by CATL, the Chinese battery maker who is already in business with Tesla and Volkswagen.

The vehicle will officially start rolling off the production line at the factory of Fisker’s manufacturing partner, Magna-Steyr in Graz, Austria in November 2022.

A solar roof and rotating screen

The EV’s battery power and interior aside, Fisker is looking to ramp up its sustainability credentials further. For instance, the Ocean Extreme, with its higher list price, has been designed with a unique solar roof, the FiskerSolarSky.

Fisker claims that it is capable of providing around 3,200 km of additional range per year under ideal conditions.

The interior also features a huge 17.1-inch screen in the centre of the dashboard. For comparison, a Tesla's screen measures 15 inches.

The Ocean's screen has the added advantage of being rotatable, allowing drivers to switch from landscape to portrait mode depending on their current usage.

As a final flourish, Fisker wants to play it cool with a "California" mode. This mode lowers all of the vehicle's windows at the touch of a button, even the quarter windows, the little windows above the rear wheels.

Making electric vehicles accessible for everyone

In the US, after federal and state tax credits as well as incentives are taken into account, the cost of a new Fisker Ocean Sport will in fact drop to $29,999 (€26,519).

"I think that’s really what we need to do for really making electrification global, we need to make electric vehicles accessible for everyone," he said.

The man who offered to create a green Popemobile

So, who is the brains behind what’s being billed as the most sustainable car in the world?

After working for BMW, Ford and Aston Martin, Fisker co-founded Fisker Inc in 2007 with Bernhard Koehler, two companions with a longstanding relationship.

As well as designing cars for wider consumption, Fisker made headlines earlier this year after a historic visit to the Vatican.

In May 2021, Fisker announced that it will develop the first ever 100 per cent electric Popemobile after meeting with Pope Francis to present a design for his future official vehicle.

To no great surprise, the new model will be based on the Fisker Ocean mounted with a large glass dome, allowing the pontiff to greet crowds of the faithful.

"I was inspired to read that Pope Francis is very concerned about the environment and the impact of climate change on future generations," Fisker told AFP back in May.

While waiting for his new custom-made vehicle to be delivered next year, Pope Francis will continue his official visits in his current Toyota Mirai.