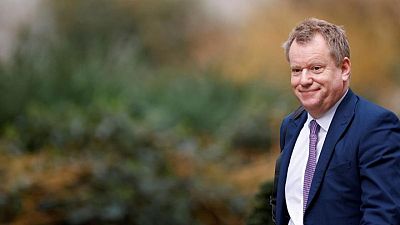 DUBLIN – British Brexit minister David Frost said on Wednesday that his government’s preference is to strike a deal to improve post-Brexit trade arrangements for Northern Ireland and that the agreement can be reached by Christmas.

Britain and the EU agreed last week to intensify efforts to solve issues around the Northern Ireland protocol. Brussels cautiously welcomed a change in tone from London, though Frost said “significant gaps” remained.

“I think it can be done. Whether it will be done is another question,” Frost told BBC Northern Ireland when asked if a deal could be reached by Christmas, as suggested by Irish Foreign Minister Simon Coveney.

“We very much hope that we will be able to bring these talks to a conclusion, that’s what we would most like to do, but if we can’t, then obviously the famous Article 16 is a very real option for us,” he said, referring to emergency safeguard measures that could potentially lead to a trade war.

Britain left the EU last year, but has since put off implementing some of the border checks between its province of Northern Ireland and the rest of the United Kingdom that the bloc says London is obliged to make under their divorce deal.

London says the checks are disproportionate and are heightening tensions in Northern Ireland, putting a 1998 peace deal at risk.

The EU’s chief negotiator, Maros Sefcovic, said on Monday he is “absolutely convinced” the sides can break the impasse if London engages on outstanding issues.

Brussels has said it needs London to reciprocate with its own concessions after the bloc offered to cut some of the checks needed on goods moving from Britain to Northern Ireland.

“The EU have made some proposals, at the moment without going into detail I’m not sure they would solve these problems of checks and processes for goods moving into Northern Ireland, but we keep talking and we’re seeing if we can move this forward in a way that does produce consensus,” Frost said.