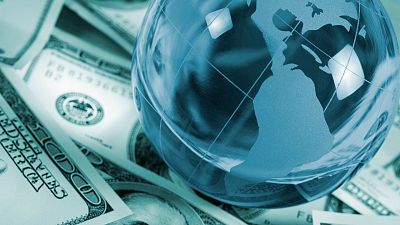 The pressure for businesses to act is rising along with global temperatures.   -   Copyright  Getty via Canva
By Pascale Davies  •  Updated: 11/11/2021

Meeting the COP26 pledges to cut greenhouse gas emissions will require a lot of money and support from the private sector.

The United Nations’ climate envoy Mark Carney said last week it would cost $100 trillion (​​€87 trillion euros) over the next three decades, adding that the finance industry should find ways to raise private money.

"The money is here - but that money needs net zero-aligned projects and (then) there's a way to turn this into a very, very powerful virtuous circle - and that's the challenge," the former Bank of England governor told attendees of the summit in Glasgow.

The Glasgow Financial Alliance for Net Zero, which represents more than 450 banks, insurers and investors and headed by Carney, pledged $130 trillion (€113 trillion) to convert the global economy to clean energy.

While the promises are there, will their actions deliver real outcomes or is it another attempt to greenwash in a business-as-usual approach?

Euronews Next spoke to Eric Usher, who heads the UN Environment Programme Finance Initiative (UNEP FI), a global partnership bringing together the UN and a global group of banks, insurers and investors.

We asked him about green finance, a structured financial activity that’s been created to ensure a better environmental outcome, which can be seen through any type of investment or loan.

Euronews Next: Is green finance working?

I would say almost everybody in the financial markets is doing something green, so that's good. The big challenge is carbon emissions are still going up in the atmosphere. What we have to be realistic about is not so much green innovation in itself, but the whole picture. And so to some extent, we talk increasingly about how do you move from green finance to greening portfolios and institutions?

It's not so much about the latest green bond issuance that an investor or a corporate issue or an investor buys. But it's the rest of the bond portfolio. How green is it and what are the plans with that over time?

So, that becomes a much wider strategic objective where we need a lot of green finance, but we also need sort of new evolutions of ‘what does it mean to be green in economic activities?’

What are the challenges in implementing green finance?

I think the big challenge today is not on green, it's greening. It's essentially the entire portfolio. What does it mean to be entirely green? And we're still in the early days there.

We have some good science and I would say leadership in this space and you should hear a lot of talk around net zero, which is a good start, but it's a much more fundamental transition.

In many industries, I would say a couple of years ago, they would look at these green players like Tesla and sort of see them as a niche, as curious. Nobody says that Tesla is curious any longer. The major auto manufacturers are terrified of whether they are going out of business or are they already out of business? Have they lost the race?

How can the energy sector and other transform?

In the energy sector, we still have this discussion. Renewables were a little niche. They’re a major player today. Although, of course, we still haven't gotten rid of all coal and other fossil fuels. So that transition has not finished but it's clearly underway.

But then if you're in the steel industry, if you're in cement, if you're in agriculture, the food system with these new alternative proteins, all of these industries are in the process of change. And once again, it's not about adding a couple of green activities.

They realise they have to totally rethink how they operate. If they don't, if they don't succeed to change, they're going to be put out of the market by these new Tesla upstarts.

I would say that the green agenda has gone from green in terms of innovation - which is great, and we need a lot more of that - but now it's really about total business model innovation.

How do you completely change your business? It's going to need a lot of green financing for that. But the strategic strategy is really not an add on. It's about changing the fundamental, the way we do business.

What are the challenges for businesses?

And so the whole risk analysis is now forward-looking. It's much more complicated.

Some would say it's like looking in a crystal ball to try to predict the future, but this is what financiers and other corporate actors are being asked to do today, which is you need to predict what's going to happen in the future and how resilient your business model or your financial portfolio is to the changes that are coming.

I think there's been good progress, a lot of it driven voluntarily, and a lot of our work in the UN is to work with the private sector to develop these norms of how you do this.

What role does the public sector have in greening?

Insurers have a lot of information on climate change. They can see the costs. They really have the science well understood.

And so it's in their interest to already start acting now. That does not get the governments off the hook because we don't want to get the idea that voluntary action is going to be enough to solve this problem.

Of course, we need improvements in policy. We need a price on carbon in different ways. But by the private sector acting, this is what incentivises or mobilises governments to learn from those actions and then start to ratchet up over time.

So it is, as we call it, a little bit of a dance between public and private.