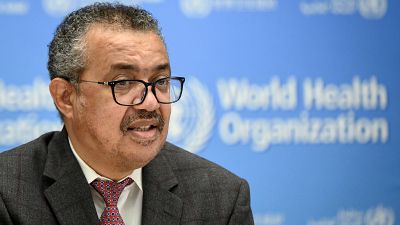 WHO director-general Tedros Adhanom Ghebreyesus stressed that the COVID-19 pandemic was "far from over" at the World Health Summit in Berlin on Monday.

One hundred nations have gathered at the summit to take stock of the pandemic, with around 50,000 deaths recorded each week worldwide due to the disease.

The WHO chief has warned there will be more pandemics in the future.

"Viruses move fast, but data can move even faster. With the right information, countries and communities can stay ahead of emerging risks and save lives. Urbanisation, deforestation, climate change, and intensified agricultural practices are all increasing the risks of epidemics and pandemics," he said.

"The pandemic will end when the world chooses to end it. It is in our hands, we have all the tools we need: effective public health tools and effective medical tools," he went on.

Tedros Adhanom Ghebreyesus also criticised the lack of equity in vaccines distribution, noting that some countries were already moving towards the administration of a third dose, but that a large part of the population in less developed countries had not even received the first dose.

He expressed the hope that the return to normality would rely on vaccines being fairly distributed between poor and rich countries.

The WHO has set a target of inoculating 40 per cent of each country's population against COVID-19 by the end of the year, and 70 per cent by mid-2022.

Meanwhile, in Italy and other European countries, prosecutors have launched a criminal investigation into coronavirus deaths in nursing homes, as Amnesty International revealed figures could be higher.

Amnesty interviewed 34 health care workers as well as union leaders and lawyers in Italy, finding reports of retaliation against nursing home staff who spoke out about unsafe conditions there.

Belgium extends mask-wearing but rules out COVID boosters for most