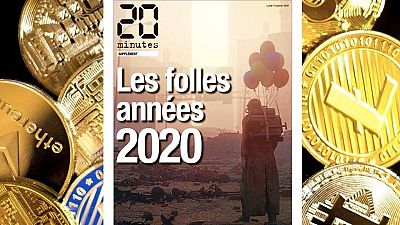 The winds of change are blowing through the media landscape. The French daily “20 Minutes”, has sold its own non-fungible token (NFT) in a charity auction on October,19.

The sale of this six-page supplement entitled "The crazy years of 2020" was organised by art gallery Piasa in Paris. The successful buyer won the bid for €3,000.

The copy is guaranteed unique thanks to a certificate of ownership based on blockchain technology, a “tamper-proof system” that authenticates both virtual currency transactions and sales of digital objects.

The money raised will go to the Safety Fund of the International Federation of Journalists (IFJ).

When a free daily newspaper enters the crypto market

20 Minutes is a general news daily, created in 2002 and distributed across French cities for free.

Published on 13 January 2020, just before the COVID-19 pandemic hit France, the issue was chosen by the editors and internet users for its "prophetic side".

NFTs have seen their value soar this year in foreign auction houses. NFTs allow any digital object (tweet, photo, animation, video, source code...) to be acquired thanks to a token, which materialises this object and proves its authenticity.

On the lookout for emerging phenomena, 20 Minutes wanted to document this technological revolution by attempting to sell its own NFT.

“The sale of an NFT appears to be an excellent way to reflect on this question while making crypto-arts intelligible to the greatest number of people.”

On the Internet, NFTs are easily exchanged via specialised platforms such as OpenSea or Rarible. However, in France, "the digital representation of a work, an intangible personal property, cannot be part of a voluntary sale by public auction" Piasa said.

In May, a modest auction house, Cappelaere & Prunaux, in Bar-le-Duc (eastern France), created a surprise by launching an "NFT" auction, but under the aegis of bailiffs, which made it possible under the law.

To get around the ban on auctioning "intangible personal property", 20 Minutes has sold, in addition to the NFT, "an offset printing plate showing four pages of the supplement".

The proceeds of the sale will go to the International Federation of Journalists (IFJ) Safety Fund, an international organisation that helps journalists in difficulty in the field. “With the Afghan crisis, the safety fund is more relevant than ever,” said journalist Laure Beaudonnet, who initiated the project.

The creation of the first NFT was "quite complicated", admits Beaudonnet. First, she had to create a digital wallet, buy ether (the cryptocurrency used by the Ethereum blockchain), then pay the transaction fees to register the digital "contract" definitively, without forgetting to assign the copyrights associated with the issue.

"You have to spend a few days if you are just starting out, and it's even more complicated for a company," she explains.

Are NFTs the future of journalism?

This big envelope, after yesterday's auction, could grow bigger thanks to NFTs. But is it a long-lasting solution?

The newspaper interviewed Frédéric Chambre, CEO of the auction house Piasa, on how this sell might be a first on the media landscape.

“There was a reflection, a collaboration, there is the offset printing plate that accompanies the NFT,” Chambre said.

“Perhaps we are on a page of history more than in the history of art. The NFT of 20 Minutes can almost be compared to a manuscript. When you buy a manuscript of Einstein, you buy history. With the 20 Minutes project, you are somewhere in between.”

For the CEO, the main challenge is to channel the NFTs: “The NFT needs to channel itself. If it goes off in all directions and wants to touch everything, it will no longer have a singular impact. It has to find its place in history.”

“Today, we are more in a system of NFTs that supplant the artist. You have created an NFT, but what is important is the work. You use the technology linked to the NFT to make it unique.”

Plan to ban most cryptocurrencies in India sparks selling frenzy