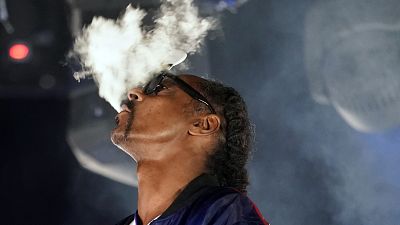 FILE- Snoop Dogg performs a DJ set as "DJ Snoopadelic" during the "Concerts In Your Car" series at the Ventura County Fairgrounds   -   Copyright  AP Photo/Chris Pizzello
By Pascale Davies  •  Updated: 12/10/2021

The artist, whose real name is Calvin Broadus, is the co-founder of Casa Verde, a vulture capital (VC) fund based in Los Angeles that focuses on the cannabis industry.

Casa Verde announced on Tuesday it was investing $15 million (€13 million) into Portugal’s medical cannabis firm AceCann. It is the US company’s first investment in Europe.

“Having Casa Verde on board, with their track record in the US, and being their first investment in Europe, it’s definitely a stamp of quality for us,” he told the publication.

The Portuguese start-up, which was founded in 2019, said it would use the funding to develop a “state-of-the-art” production facility in Vendas Novas, an hour outside the capital Lisbon.

“We pivoted this to do this in an indoor facility so that’s already something different to most other European projects,” he said, predicting that by 2024 AceCann’s new production facility could provide for as much as €15-20 million in annual sales.

“As legalisation sweeps across Europe, we foresee a rapid and exponential rise in demand for high-quality cannabis flower and extracts,” the company said on its website.

While cannabis is illegal in Europe, some countries do allow it to be used for medicinal purposes and the industry is growing fast.

Europe’s cannabis market is expected to reach € 3.2 billion by 2025, according to the European Cannabis Report.

Already, 60,000 people were able to access cannabis medications for the first time in Europe in 2020, bringing the total to 185,000 patients for the year.

Germany could in due course legalise cannabis for all adults as all three parties engaged in coalition talks following the September election plan to relax the ban on cannabis possession.

More European countries, including Switzerland and the Netherlands, are also expected to open up to the prospect of legalising cannabis over the next several years.

Italy set to hold a referendum on decriminalising cannabis

Is the Czech Republic on the cusp of a cannabis boom?