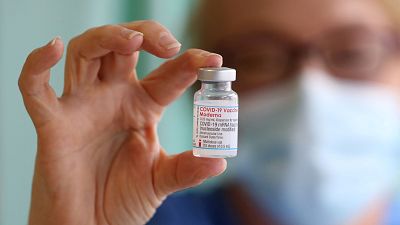 Danish health authorities said they had "badly worded" a statement, making it appear that the country was no longer offering the Moderna jab to under-18s   -   Copyright  Geoff Caddick / AFP
By Tom Bateman  & Reuters  •  Updated: 08/10/2021

Danish health authorities have reversed a decision to stop offering the Moderna COVID-19 vaccine to under 18s amid fears it was linked to higher rates of heart inflammation in young people.

In a statement on Friday, the Danish Health Agency said the "recommendations have not been changed," adding that both the Moderna and Pfizer/BioNTech vaccines were "highly effective vaccines that have an important place in the general vaccination programme in Denmark".

The Danish Health Agency's head of press Tina Gustavsen told the Reuters news agency that earlier indications it had stopped giving the Moderna jab to under-18s were a mistake.

"We've communicated badly in this case," Gustavsen said. "It was simply bad wording".

"We felt there was a need to say that we were not worried. We think it is a good and effective vaccine and we will continue to use it in the Danish programme".

The agency said around 1,200 under-18s had so far received the Moderna vaccine - also known as Spikevax - in Denmark.

On Wednesday, Sweden's health authority followed Denmark's lead, saying it would stop using the Moderna vaccine for people born in or after 1991, as data pointed to an increase of the heart conditions myocarditis and pericarditis among young people that had been vaccinated.

On Friday, a spokesperson for the Public Health Agency of Sweden told Euronews Next that the country had no plans to reverse its decision to stop offering the Moderna jab to under 30s.

Finland's health agency THL also announced a rollback of its Moderna vaccination programme on Thursday, recommending that it not be offered to men and boys under 30.

THL said that any males under 30 who had received one dose of Moderna would be offered a second dose of the Pfizer/BioNTech jab.

Euronews Next contacted THL for a response to the Danish health agency's announcement, but it did not respond by time of publication.

Norway already recommends the Pfizer/BioNTech vaccine - now branded as "Comirnaty" - to minors and said on Wednesday that it was reiterating this.

The EMA's safety committee concluded in July that inflammatory heart conditions can occur in very rare cases following vaccination with Comirnaty or Spikevax, more often in younger men after the second dose.

The benefits of shots based on so-called mRNA technology used by both Moderna and Pfizer-BioNTech in preventing COVID-19 continue to outweigh the risks, regulators in the United States, EU and the World Health Organization have said.