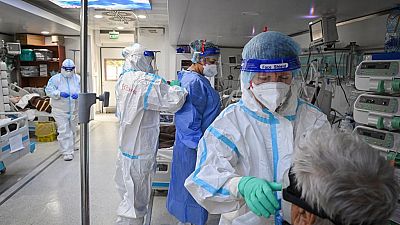 COVID-19 cases continue to surge in some European countries while governments work to extend vaccination campaigns to prevent more deaths due to the virus.

Romania's president said the situation was now "a catastrophe" while Latvia entered a new state of emergency to encourage vaccination. Deaths due to COVID-19 in Russia, meanwhile, have been increasing.

Here's a look at the top COVID-19 stories in Europe.

Romania reported on Wednesday a record of 330 COVID-19 deaths in 24 hours and 15,000 new infections, its highest number since the beginning of the pandemic.

The vast majority were unvaccinated patients or people who, despite being vaccinated, were older and had preexisting conditions and there were no intensive care beds available on Tuesday.

"I received today's data on the pandemic. We have almost 15,000 cases. Unfortunately, we have over 330 deaths today. It's a catastrophe," said President Klaus Iohannis.

Several restrictions are currently in force in Bucharest, as authorities try to limit the spread of the virus.

Wearing a mask is mandatory in crowded public spaces such as markets, fairs, public transport stations, commercial areas, and the workplace, according to a decision of the capital's Committee for Emergency Situations.

A curfew is also in place between 6.00 pm and 5.00 am, but only for unvaccinated people. Cinemas, restaurants, and private events such as baptisms or weddings can be organised at half capacity, but only for those who are fully vaccinated or who have recovered from infection.

Bars and clubs in the capital are closed.

Latvia to enter state of emergency

Latvia will declare a state of emergency for three months over the COVID-19 situation.

Prime Minister Krišjānis Kariņš said the measure is to increase the vaccination coverage much more rapidly.

The country has recorded more than 1,000 daily cases since the beginning of the month.

"The fight against COVID-19 will not be over until the vaccination coverage reaches 90 per cent in risk groups, including among seniors, and 70-75 oer cent in the whole society," said Kariņš.

In Russia, the situation remains serious, with the country registering over 27,000 new confirmed coronavirus infections over the past 24 hours, its highest daily number since December 31 last year.

There were also 924 deaths recorded in the same period, a similar figure to the day before.

Active cases are now above 683,000, according to the latest official data.

Finland joined Sweden and Denmark in pausing the use of Moderna’s COVID-19 vaccine for younger men due to reports of a rare cardiovascular side effect and after a recommendation by the country's Institute for Health and Welfare (THL).

Denmark announced the move on Wednesday but has since backtracked, saying on Friday that it was still administering Moderna to under 18s and that the ban was a miscommunication.

THL said that younger men who received the vaccine had a slightly higher chance of developing myocarditis, an inflammation of the heart muscle.

Mika Salminen, director of the Finnish health institute, said Finland would instead give Pfizer’s vaccine to men born after 1991.

"A Nordic study involving Finland, Sweden, Norway, and Denmark found that men under the age of 30 who received Moderna Spikevax had a slightly higher risk than others of developing myocarditis," he said.