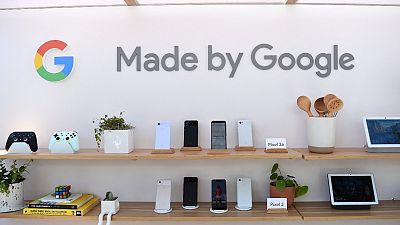 Google products are displayed during the Google I/O conference at Shoreline Amphitheatre in Mountain View, California on May 7, 2019.   -   Copyright  Josh Edelson / AFP
By Julie Gaubert with AFP  •  Updated: 06/10/2021

Google wants to encourage its users to make greener decisions, such as choosing a route that consumes less by car rather than a faster one.

It comes as the tech giant announced updates to several of its services on Wednesday.

It’s part of a new pivot for both users and employees to be more sustainable, with the change starting closer to home.

Its new campus in California, for instance, is covered in more than 50,000 solar panels as it bids to be one of the first workplaces to run on 90 per cent carbon-free energy.

“Every question you ask Google, every Gmail you send, every YouTube video you watch will be delivered without emitting any carbon in the air,” Sundar Pichai, Google’s CEO, said.

To comply with Robert Frost’s lines “I took the one less travelled by, and that has made all the difference,” Google Maps will now offer less polluting journeys by default when the arrival time is similar.

This feature, which will first be deployed in the United States and then in Europe in 2022, "will have the same impact next year as removing 200,000 cars from the roads," assured the group's boss, Sundar Pichai.

It has been developed thanks to AI and insights from the US Department of Energy’s National Renewable Energy Laboratory (NREL).

According to Jeff Gonder, group manager at the Centre for Integrated Mobility Sciences at NREL, this is a positive change for everyone.

“Not only does Google Maps' eco-friendly routing bring NREL’s fuel-efficient technology from the lab to the road, but it has huge potential to significantly lower emissions and saves drivers money on gas — something that’s good for both people and the planet,” he said.

The feature will also see the introduction of lite navigation for cyclists on Google Maps, making it simpler to find bikes and scooter shares in over 300 cities around the world.

Will flying green be possible?

When travellers search for flights on Google, they will see the associated CO2 emissions for every flight directly in their search results, including higher CO2 emissions for first classes seats which take up more space.

To put these estimates in context, flights with significantly lower emissions will be labelled with a green badge.

To calculate these estimates, Google plans to combine data from the European Environmental Agency (EEA) with the flight-specific information it gets from airlines and other providers such as aircraft type, trip distance and the number of seats in each seating class.

The tech giant joined the Travalyst coalition earlier in September in order to keep at pace with other travel partners to offer customers more sustainable choices.

“Addressing the challenge of climate change requires us to find solutions at scale, and this is especially true when it comes to travel and tourism,” said Kate Brandt, chief sustainability officer at Google.

“By working with Travalyst and our industry partners, we aim to build tools and technology that enable travellers and businesses around the world to prioritize sustainability”.

Similar data will be provided for hotels, financial services or electronic devices.

Hotel groups like Hilton or Accor have already started aligning themselves with Google regarding the transparency of their sustainable practices.

The tool to make your home more sustainable

According to Google, this tool has helped customers save over 80 billion kilowatt-hours of energy for over a decade - enough energy to power 23 million electric cars for a year.

Now, it offers a new service, Nest Review, which is compatible with thermostats to “make it easy to support a clean energy future”.

It comes with monthly track reports and shows customers the electricity coming into their home is cleaner and when it’s not so clean throughout the day.

The customer can then make more informed choices such as running the washing machine a little earlier or later, when the grid is cleaner.

Is it too good to be true?

"Our goal is to make green choices easier," said Pichai. “Individually, these choices might seem small. But when you multiply them together across our products, they equal big transformations for the planet”, added the boss.

Now in its third decade of producing its climate action report, Google said it is focusing on several commitments in particular, using the EPA greenhouse gas equivalencies calculator.

Among its targets, the tech giant aims at operating on carbon-free energy 24/7 by 2030, immediately eliminating its legacy carbon emissions, deploying $5.75 billion (€4.98 billion) in sustainability bonds or enabling 5 GW of new carbon-free energy in manufacturing regions by 2030.

“We’ll need nothing less to avert the worst consequences of climate change, and we’ll continue to find ways our products can help,” Google warned.