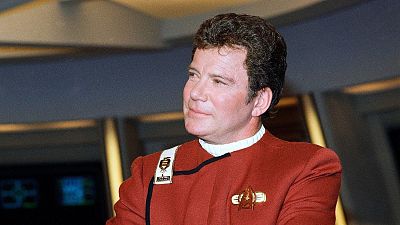 Captain Kirk is rocketing into space next week — boldly going where no other sci-fi star has gone before.

Jeff Bezos’ space travel company, Blue Origin, announced on Monday that Star Trek actor William Shatner will blast off from its Texas base on October 12.

Bezos, the founder and former CEO of Amazon, is a huge fan of the sci-fi series and even had a cameo as a high-ranking alien in the 2016 film Star Trek Beyond.

His rocket company invited Shatner to fly as its guest.

Shatner will become the oldest person to go to space. He’ll join three others — two of them paying customers — aboard a Blue Origin capsule.

And he won’t be the only actor in zero gravity when he goes. Russia launched an actress and a film director to the International Space Station on Tuesday for almost two weeks of moviemaking.

Shatner's flight, by comparison, will last just 10 minutes and reach no higher than about 106 km. The capsule will parachute back down to the desert, not far from where it took off.

"I’ve heard about space for a long time now. I’m taking the opportunity to see it for myself. What a miracle,” Shatner said in a statement.

Shatner played the role of the USS Starship Enterprise's commander for three seasons of Star Trek from 1966 to 1969. He also portrayed Captain James T. Kirk in seven movies, directing one of them. He's currently the host and executive producer of a History Channel show, 'The UnXplained'.

I hope William Shatner doesn't have unrealistic expectations of what space is like. pic.twitter.com/WV14IUm5QI

Also launching with Shatner are a former NASA engineer who founded a nanosatellite company and the co-founder of a software company specialising in clinical research. The two took part in the auction for a seat on the first flight. That seat cost $28 million (€24 million); Blue Origin isn't divulging any other ticket prices.

A fourth seat on the flight is going to Blue Origin's vice-president of mission and flight operations, who used to work for NASA as a space station flight controller.

A Blue Origin spokeswoman said Shatner, like the others, met all the company's health and physical requirements.

Last week, more than 20 current and former Blue Origin employees accused the Washington state-based company of having a toxic work environment and not adhering to proper safety protocols.

Blue Origin said it doesn’t tolerate harassment or discrimination and stood by its safety record.

Four search engine rivals have called on the EU to set rules to limit Google’s reach in the upcoming legislative proposal on the Digital Markets Act (DMA) to counteract the search engine’s dominance.

DuckDuckGo, Qwant, Ecosia, and Lilo sent an open letter to European lawmakers arguing that, "the DMA fails to address the most acute barrier in search: Google’s hoarding of default positions".

The four tech companies said that Google achieved its market dominance through this and that the browser set up for choosing who is the default search engine is skewed in favour of Google and is only shown once.

The European Commission in 2018 levied a record €4.24 billion fine on Google for unfairly using Android to cement the dominance of its search engine and ordered it to ensure a level playing field for rivals.

Google subsequently made changes and four months ago said it would let rivals compete for free to be the default search engine on Android devices in Europe.

However, the rival search engines said that the effects of this ruling have not been felt and want further action to be taken.

"The DMA should enshrine in law a requirement for a search engine preference menu that would effectively ban Google from acquiring default search access points of the operating systems and the browsers of gatekeepers," they said.

The DMA may come into force in 2023 once it gets the green light from EU lawmakers and EU countries.

Perseverance Rover confirms there used to be a lake on Mars

Scientific analysis of photos taken by the Mars Perseverance Rover has confirmed that the Jezero Crater on the planet used to be home to a lake 3.7 billion years ago.

There was also a river feeding into the lake according to the researchers and the images also reveal evidence that the crater endured flash floods.

This flooding was energetic enough to sweep up large boulders from tens of kilometres upstream and deposit them into the lakebed, where the massive rocks lie today.

The Perseverance Rover touched down in the Jezero Crater back in February. Scientists chose this location as they believed that it used to be a body of water.

"Until we actually landed there and confirmed it was a lake, it was always a question," said Benjamin Weiss, professor of planetary sciences in MIT’s Department of Earth, Atmospheric and Planetary Sciences and a member of the analysis team.

"If you look at these images, you’re basically staring at this epic desert landscape. It’s the most forlorn place you could ever visit.

“There’s not a drop of water anywhere, and yet, here we have evidence of a very different past. Something very profound happened in the planet’s history".

The Rover will continue to explore the crater and scientists hope there will be new discoveries. Now that they know the crater was a lake, they think that its sediments could hold traces of ancient aquatic life.

The Mars Rover will take samples of the sediments which will be returned to Earth where scientists will analyse them for signs of life.

Google fined €162,000 by Russia for failing to remove banned content