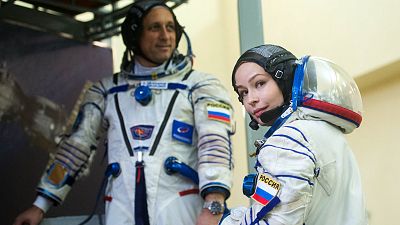 A Russian filmmaking duo are set to win the moviemaking space race, dashing Tom Cruise’s dream of being the first to shoot a film entirely in orbit.

That distinction will go to director Klim Shipenko and actress Yulia Peresild who are launching into space on October 5 for a 12 day extraterrestrial shoot.

The pair beat out thousands of hopefuls to win the opportunity of making their film, entitled The Challenge, aboard the International Space Station.

The drama centres around a doctor who is sent to the ISS to perform an urgent operation on an astronaut.

Seasoned astronaut Anton Shkaplerov will accompany them on the expedition and act as mission commander. He has also been tapped to moonlight as an actor in the film.

Peresild and Shkaplerov will take on additional production roles, acting as costume designer and makeup artist, and Director of Photography respectively owing to the limited crew size.

"Despite all difficulties during this not easy path, this is very interesting, and it is a huge satisfaction and even a thought that it could really happen is beautiful," said Peresild.

To prepare for the mission, both Shipenko and Peresild had to undergo a rigorous three-month training programme, including learning the basics of space survival, completing zero gravity, centrifuge and vibration tests and practising for in-flight emergencies.

So far, their efforts have impressed their chaperone.

“The guys showed themselves in the best way,” said Shkaplerov. “it is evident that they have a calling, and they want very much for this space experiment under the name Challenge to be implemented at the best level, the best international level".