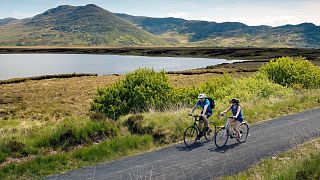 By the late 19th century, Ireland had a well-connected railway network that crisscrossed the entire island.

As the following century progressed, Ireland underwent monumental changes: gaining independence from the British, the partition of the country into north and south and the outbreak of both civil and world wars.

Emigration increased, the northern parts of the railways became disconnected from their southern counterparts and large swathes of the network fell into disuse. The land they were built on was gradually sold off and the once bustling lines fell silent for decades.

What happened to these abandoned railway lines?

Over half a century later, the germ of an idea was planted to repurpose the old routes and transform them into rural cycling hubs.

It wasn't long before the idea had built up steam.

On a relatively modest budget of €6.7 million, 42 km of an abandoned Mayo railway line became a tourist hub and a key part of local infrastructure in 2010.

It brought new life to the area, stimulating job growth at a time when Ireland had entered into a brutal recession and period of fiscal austerity. At the same time, it encouraged local people to embrace a green form of transport and provided energy that was desperately needed.

It is perhaps a rare occurrence when local government, the community, landowners, and funding all slot into place together to create an amenity that the vast majority of people agree on.

The success of the Great Western Greenway inspired the Great Eastern Greenway along Carlingford Lough’s southern shore, which led in turn to the Old Rail Trail Greenway from Mullingar to Athlone, Waterford’s Greenway as well as the recently opened Royal Canal Greenway through Kildare to Longford which is soon to be connected to Dublin.

Putting a plan into motion

"I think we were just in the right place at the right time," Anna Connor, the tourism officer for Mayo County Council told Euronews Next. “It was new. It was innovative".

Connor played a key role in making the first greenway a reality. In order for the plans to go ahead, 162 landowners had to be convinced to allow the construction of the route over their land. The compensation for their cooperation? The grand sum of €0.

So, how does one convince 162 people to allow thousands of strangers to access their land while effectively giving away part of it for free?

It brought a whole new energy to the towns and villages along the way that was never there before. So it just reawakened that whole area of West Mayo

"Literally, what we [Connor along with Pádraig Philbin, an area engineer with the council] did is we knocked on the doors of each of those landowners and we asked them would they work with us?" she recalled.

"So, we got I'd say 80 to 90 per cent of support overall just knocking on the doors.

"We had the relationship with the community and the fact we could hold it up that it's the first of its kind in the country. And the other side of it was the older landowners would have remembered the old train line and they would have had stories associated with it. And the thinking was, it'd be lovely to try and bring it back to something".

Dealing with bumps in the road

It wasn’t completely plain sailing though as some didn’t agree to their requests. When this happened, they would come up with solutions often involving veering off the old track and building on adjacent land. There were also houses built along parts of the old railway so they had to deviate slightly when that was the case.

Overall, it was a bit of a phenomenon in terms of building a major infrastructure project. The idea was formed in 2006, approval was given and construction began in 2009. Less than one year later, the first 18 km stretch was officially opened to the public before being extended in 2011.

"It brought a whole new energy to the towns and villages along the way that was never there before. So it just reawakened that whole area of West Mayo," Connor said.

An economic impact report by Fitzpatrick Associates in 2016 found that there were 265,000 visitors to the greenway annually and that it had led to 200 direct jobs.

Businesses along the route have thrived from the increased traffic. Hotel occupancy increased, bike rentals popped up and many local pubs expanded their services to include food.

Even blood sausages, known as black pudding in Ireland, have been named after the western route.

"The greenway has become such a part of Kelly’s Butchers that we’ve created a new pudding just for it...Kelly’s greenway pudding," Seán Kelly, the owner said when it launched a few years ago.

The building of the various greenways has also led to closer ties formed between the local Irish communities and their European counterparts. Several of Ireland’s greenways make up a part of EuroVelo 1, the Atlantic Coast Route.

EuroVelo is the European cycle route network, comprising of 17 long-distance cycle routes passing through and connecting 42 countries. Its main objective is to “encourage European citizens to cycle and so to promote a shift to healthy and sustainable travel – for daily trips, recreation, and cycling tourism”.

It maps out cycle routes across the continent that reach certain safety standards and ensure they are always close to important amenities.

"I guess the attraction of the greenways is primarily the fact that there's no traffic," said Doug Corrie, the representative of the National EuroVelo Coordination Centre for Ireland. “I think that's number one for people that are inexperienced cyclists".

He sees the greenways and EuroVelo routes as a great thing not just for tourism but also as transport infrastructure for the local communities. In Mayo, for example, there is a school along the greenway and it allows children to cycle safely to class everyday.

The EuroVelo network also allows for European countries to learn from each other’s mistakes and successes. Before the Great Western Greenway in Mayo was built, Connor and a couple of others travelled to Spain where they looked at similar greenways for inspiration.

How has the attitude towards cycling changed in recent years?

The COVID-19 pandemic has also played a part in transforming cycling in Ireland and Europe.

"Cycling has risen up the agenda," said Ed Lancaster, EuroVelo Director at the European Cyclists’ Federation.

"And I think, of course, the impact of the pandemic has acted as a kind of accelerator. I know it's obviously had big negative consequences on many people's lives, but actually in terms of cycling, the numbers have gone up both in terms of using your bike for mobility and also for tourism".

Despite the fact that foreign tourism has been stunted in Ireland and elsewhere, the country’s greenways continued to thrive this summer through domestic visitors. The Great Western Greenway averaged 1000 users per day in July and August, according to Connor.

"And the Greenway has brought a good bit, I'm not saying it's bringing it all, but it's definitely bringing a good portion of that business here".

Greenways are the rarest of beasts where they are popular with the public, have a political consensus (usually), are cost-effective, environmentally sound and their return to the local economy and community is massive.

As Europeans are becoming increasingly eco-conscious, don’t be surprised to see one coming to a town near you soon.