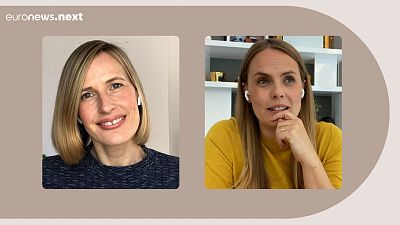 There are many skills that help shape a leader. But when it comes to showing leadership, what is the most important trait?

According to Bettina Fetzer, Head of marketing at Mercedes-Benz, there is one attribute that stands out the most: authenticity.

Fetzer - who rose through the ranks of the male-dominated automotive industry and received a promotion whilst on maternity leave - credits her success to having the freedom to show up as her whole self at work, she told Euronews Next.

She believes that freedom and expression - especially in the era of home working - need to go further.

"People who also dare to speak up and show that they are not just walking robots - they have a life and they have people around them they love and that they need to take care of. It's natural," Fetzer said.

"I purposely planned on the moment where company life would meet family life. I'd take my little baby to work".

Fetzer also spoke of the leadership traits defining the post-pandemic world, including openness and empathy.

"My mantra is always to involve people, to inspire people and to empower people," she added.

The Changemakers series in partnership with Cannes Lions Live and Euronews Next is a 1-1 interview series with female leaders who are rethinking their roles and creating a better future for their industry.