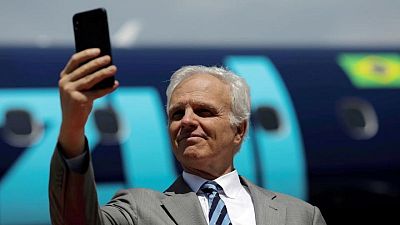 The order brings Breeze’s total A220 order to 80, making it the family’s second-biggest customer after Delta Air Lines and leapfrogging Neeleman-backed JetBlue.

Breeze is Neeleman’s fifth commercial airline and is injecting new competition into a battered airline market as U.S. domestic travel recovers from the coronavirus crisis.

It began operations in May using Embraer regional jets and plans to start using the new, Canadian-designed A220 on routes longer than two hours’ flight time from early 2022.

“This just shows growth is on the way,” Neeleman told Reuters in an interview after confirming the purchase, which involved the exercising of purchase options.

Reuters reported in April that Breeze had placed an order for 20 Airbus A220 jets, bringing its total to 80, but that the name of the buyer was being withheld – a common practise as airlines polish tightly held marketing plans..

Airbus confirmed that the order announced on Monday was already on its books in the undisclosed buyer column.

Airbus said the A220 aircraft would be delivered from its Mobile, Alabama, assembly line.

Using 13 Embraer aircraft, it has set its sights on linking smaller U.S. cities with little or no direct service from larger carriers, including Tampa, Florida or Norfolk, Virginia.

Neeleman, who has founded a string of airlines including JetBlue and Canada’s WestJet, said he also expects to acquire about a half-dozen additional Embraer planes next year.

He said Breeze’s bookings are “a little softer” in the near-term because of COVID-19, but look stronger further out. “The virus has probably taken 10% out of the bookings,” he said.