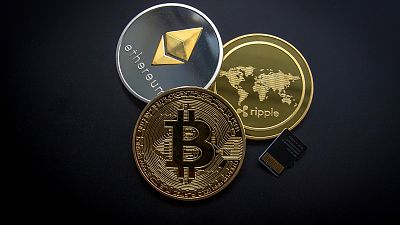 The price of Bitcoin, Ether and other cryptos plunged on Tuesday, the same day Bitcoin was made official currency in El Salvador.   -   Copyright  Canva
By Reuters  •  Updated: 07/09/2021

The price of cryptocurrencies plunged and crypto trading was delayed on Tuesday, a day in which El Salvador ran into snags as the first country to adopt Bitcoin as legal tender.

Shares of blockchain-related firms also fell as crypto stocks were hit by trading platform outages. But the major focus was on El Salvador, where the government had to temporarily unplug a digital wallet to cope with demand.

Major cryptocurrency exchanges Coinbase Global Inc and Kraken said they faced delays in some transactions on their platforms.

Coinbase said some transactions were delayed or cancelled at "elevated rates" and that "our apps may be experiencing errors".

The exchange later said issues with Coinbase card swipes were resolved and that transactions were going through normally.

The Gemini exchange said it temporarily entered a full maintenance period to address an exchange-related issue that caused performance trouble.

Inflation: What are governments doing to ease the financial pain?