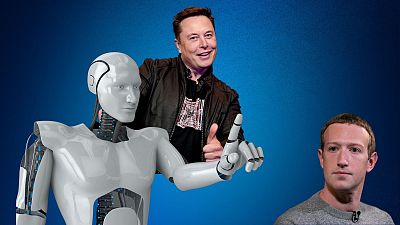 Tesla boss Elon Musk has unveiled plans for a humanoid robot that will use some of the same technology as the company's famous electric vehicles.

It will also perform repetitive tasks that Musk claims people do not want to do themselves.

The entrepreneur promised a first prototype of the "Tesla Bot" next year.

"Tesla is certainly the most important robotics company in the world, because the cars are semi-conscious robots on wheels, with an on-board computer dedicated to autonomous driving," Elon Musk argued in an online event about his group's advances in artificial intelligence.

"It makes sense to give this a humanoid form," he added.

The aim of the presentation, which focused on the development of autonomous driving technologies, was to attract new engineers.

Tesla is currently under investigation over its Autopilot and Full Self Driving (FSD) technologies. The carmaker is being accused of misleading motorists into believing that vehicles can drive themselves.

The Tesla Bot will be "friendly" and you will be able to "run away from it by running faster than it does," joked Elon Musk.

He also spoke of "profound implications for the economy," since "the economy is based on work". He envisages a world where physical effort will no longer be compulsory but "a choice".

Twitter has announced it will be redesigning its new redesign after users complained it was causing them headaches.

The company introduced a revamped version of its website and app last week, claiming it would make it more accessible, less cluttered and easier to use.

However, it appears to have done the opposite for some users.

Among the changes was the introduction of Twitter’s new original font called Chirp.

It also updated its colours to be "high contrast and a lot less blue — a change made to draw attention to the photos and videos you create and share".

And it is this change in particular that has jarred many people as the high contrast has caused headaches and problems, particularly for those with accessibility needs.

Twitter now says it will introduce some new contrast changes to make the design "easier on the eyes" as the company recognised user complaints that "the new look is uncomfortable for people with sensory sensitivities".

The company also added that it had identified issues with the Chirp font for Windows users and was "actively working on a fix".

Some have suggested that the social media platform gives users the option to choose a site design that suits them as there is no one size fits all solution for those with accessibility needs.

Federal regulators have sharpened their bid to break up Facebook, alleging in a revised complaint on Thursday that the social network giant pursued a laser-focused strategy to “buy or bury" rivals to suppress competition.

It is the Federal Trade Commission's second antitrust run at the company. A federal judge in June dismissed antitrust lawsuits brought against Facebook due to a lack of evidence.

“Facebook has today, and has maintained since 2011, a dominant share of the relevant market for US personal social networking services,” the complaint says, pointing to time spent and active-user metrics on the daily and monthly scale.

The FTC is asking that Facebook sell Instagram and WhatsApp in a bid to remove its monopoly.

The agency's lawsuit last December alleged Facebook engaged in a "systematic strategy" to eliminate its competition, including by purchasing smaller up-and-coming rivals like Instagram in 2012 and WhatsApp in 2014.

Facebook said the FTC was attempting to revive a meritless lawsuit and said it will vigorously defend itself against what it said was an effort to rewrite antitrust laws.

"There was no valid claim that Facebook was a monopolist — and that has not changed," the company based in Menlo Park, California, said in a prepared statement.

"Our acquisitions of Instagram and WhatsApp were reviewed and cleared many years ago, and our platform policies were lawful".

The company has until October 4 to formally respond.

Facebook 'banned' the Taliban from WhatsApp. They kept using it