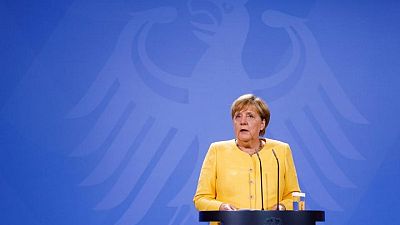 By Andreas Rinke and Michael Nienaber

BERLIN – It was one of Chancellor Angela Merkel’s most radical ideas during her last term in office: a new agency that would bring to market ground-breaking German innovation such as a way to clean the world’s oceans and a therapy for Alzheimer’s disease.

But two years after Merkel launched the project, driven by both her own scientific background and concerns that Europe could fall behind, the SPRIN-D agency for disruptive innovation is struggling under the weight of institutional, cultural and budgetary constraints.

Summing up some of the frustration echoed by Merkel herself, the head of the agency, Rafael Laguna de la Vera, told Reuters: “There is a valley of death that every innovative technology has to go through before it can be turned into a marketable product.

“In Germany, this valley of death is especially long.”

The concept is to identify and support potentially ground-breaking technologies in niche fields – outside the vast R&D landscape Germany has long been associated with in the car industry and engineering – to develop new business areas to secure the jobs of the future.

It takes a two-pronged approach to track down ideas.

Inventors can pitch projects without any deadlines to receive funding. In addition, the agency is launching challenges to motivate creative minds to develop solutions for specific problems. The first “SPRIN-D challenge” is calling on inventors to find a new drug for combating viral diseases.

One of the most celebrated innovations out of Germany, the BioNTech COVID-19 vaccine, developed with U.S. pharma giant Pfizer, was created outside the agency structure, although it did receive a 375 million euro science ministry grant.

Among SPRIN-D’s first projects is the development of the Alzheimer’s treatment, a way to rid the oceans of micro plastic and an analogue computer that is faster and less energy-consuming than digital rivals.

The early-stage projects have yielded no breakthroughs yet from the Leipzig-based agency that has a staff of 36. Without changes, Merkel and Laguna are concerned there might never be and the lost opportunities of the past could be repeated.

The MP3 coding format for digital audio, for example, was invented by scientists at Germany’s state-funded Fraunhofer Institute in the 1980s. But it took companies from Asia and America to realise its commercial potential and turn it into cutting-edge applications and devices such as Apple’s iPod.

SPRIN-D has an annual budget of 100 million euros – a fraction of the 9 billion euros supporting start-ups in general in Germany and of the 3 billion euro budget of the U.S. Defence Advanced Research Projects Agency on which it is modelled.

The small budget has partly to do with a decision by Merkel’s ruling coalition to forbid SPRIN-D to support military applications as the co-governing, centre-left Social Democrats insisted on a purely civil nature of the agency.

“This means that the leaps have been still quite small so far,” Merkel said during a research summit in May, making no secret of her frustration when she added that this anti-military approach seemed “very German” to her.

Her remarks show the limited influence even a chancellor with 16 years in power has on Germany’s deeply rooted pacifism, following the national trauma of having started two world wars.

Thomas Jarzombek, a member of Merkel’s conservatives and Berlin’s aerospace policy coordinator and pointperson for start-ups, told Reuters the decision to separate end use was weakening SPRIN-D because it was often difficult to tell from the beginning into what kind of product an idea could result in.

Another reason for the small budget is Germany’s long tradition of fiscal prudence and accountability, with strong veto powers of the parliament and a separate body in charge of examining state expenditure, the Federal Audit Office.

Because of the nature of innovation, Laguna said, sometimes nine out of 10 ideas simply lead nowhere whereas the 10th could yield a revolutionary product or application.

“What we actually would like to do and should do is to give inventors the money and tell them: Here, just go ahead,” he said.

“If we want to finance a project 100%, we have to found a 100% subsidiary of SPRIN-D which then has to get a loan from the government,” Laguna said, a step which entails more budget scrutiny from lawmakers.

To enable SPRIN-D to promote disruptive innovations more effectively, Laguna wants the next government to exempt its projects from competition rules in early-stage financing, enable support also through minority stakes and get the green light for higher wages to compete with salaries in the private sector.

The conservative CDU/CSU bloc as well as the business-friendly Free Democrats are aiming for a reform which would give the agency more fiscal and political independence.

The Greens manifesto for the Sept. 26 parliamentary election, after which Merkel steps down, pledges to make SPRIN-D “more flexible”.

The SPD, in contrast, puts a bigger emphasis on the state bank KfW, which it wants to see playing a more active role as an innovation driver. “Product developments must be able to rely on the state as a contractor,” it says.

In the medium term, the problems can only be solved with a European agency for disruptive innovation, said Wolf-Dieter Lukas, state secretary in the conservative-led science ministry, adding that big public orders are often needed to support new technologies.

However, efforts by Merkel and French President Emmanuel Macron to launch a joint Franco-German innovation agency, as a step towards a larger multi-national agency, have failed due to differing views between Berlin and Paris.

“The United States and China have very large domestic markets. So for us, the equivalent can only be the EU’s single market, we cannot limit ourselves to Germany,” Lukas said.