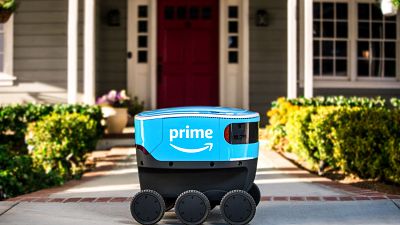 In a blog post published on July 1, the tech giant said its new development centre in Helsinki would take on over two dozen engineers.

The Finnish team will carry out research and development for Amazon Scout, the company's autonomous delivery service currently operating in a few locations in the US.

According to Amazon, the Finnish team's focus will be on developing 3D software which "simulate the complexity of real life," in order to "ensure Scout can safely navigate around obstacles while making deliveries".

It was reported in January that Amazon had acquired Umbra, a Helsinki-based 3D modelling specialist.

Umbra's co-founder Seppo Lappalainen, who now works for Amazon Robotics in Helsinki, highlighted some of the company's previous products on his LinkedIn profile. They include "a cloud-based service for optimising and delivering massive 3D datasets to virtually any platform".

"The prime use-case revolves around 3D scanning of real environments," he wrote.

Before Umbra's takeover by Amazon, the company had won roughly €3 million in funding from venture capital investors.

Not the only drone in town

Amazon's arrival in Finland follows that of rival tech giant Alphabet, whose Wing drone delivery subsidiary began a pilot operation in the Nordic country in 2019.

According to social media posts by Wing, Vuosaari residents can order products from a local grocery chain, food from a Helsinki catering service and chocolates from one of Finland's best-known brands, Fazer.

These drones are airdropping vaccines to remote Ghanaian villages