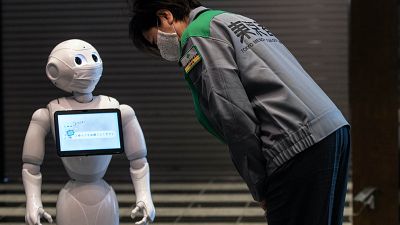 Pepper the robot is no more after its maker Softbank halted production this week.   -   Copyright  PHILIP FONG/AFP
By Tom Bateman  •  Updated: 04/07/2021

RIP to a real one. It emerged this week that Japanese tech giant Softbank has "paused" manufacturing of Pepper, the friendly humanoid robot that launched in 2014.

Pepper's selling point was that it could read human emotions. Softbank promoted the robot for use as a customer service agent and a home companion, but it never really caught on.

Pepper became relatively commonplace in Japan when Softbank – one of Japan's biggest mobile network operators – placed them in its retail stores.

But just 27,000 were made after the Japanese company bought out Aldebaran, the French robotics firm which created Pepper, in 2012.

Now half of the 330 jobs at the French firm – now Softbank's robotics arm – could disappear as Softbank retreats from the sector.

Sources at Softbank told Reuters that culture clashes between the French business and Tokyo management hurt Pepper's development, while sales were impacted by its limited functionality and unreliability.

The future is electric

Nissan announced plans to build a new battery plant in the United Kingdom this week.

The Japanese carmaker said its partnership with Chinese battery firm Envision AESC would see roughly €1.2 billion worth of investment in a 9 gigawatt-hour battery plant at its current manufacturing base in Sunderland.

"This project is the demonstration of the renaissance of the British car industry," Ashwani Gupta, Nissan's chief operating officer, told reporters at the plant in northern England, which exports 70 per cent of its vehicles to the European Union.

Britain's trade deal agreed with the EU last year allows for the free trade of cars. However, rules of origin applied since Brexit mean at least 40 per cent of the value of a car has to be produced in the United Kingdom or EU to be sold in the bloc.

That requirement rises to 55 per cent from 2027 - a crucial detail when you consider that the battery can make up half the sales price of an electric vehicle.

In essence, it means importing them from outside the EU or UK would close off the European market to British-based EV factories.

Are pop ups the solution to fighting hate online? That's what the social media giant appears to be looking into, with reports emerging this week that some users in the United States received alerts saying they or their friends may have been exposed to "harmful extremist content" on the site.

According to CNN, Facebook representatives said the messages displayed to users were linked to it's Redirect Initiative, a programme that the company says helps "combat violent extremism and dangerous organizations by redirecting hate and violence-related search terms towards resources, education, and outreach groups that can help".

One alert that circulated on social media asked, "Are you concerned that someone you know is becoming an extremist?"

Another points users toward a support page, saying "Violent groups try to manipulate your anger and disappointment. You can take action now to protect yourself and others".

According to Facebook's own figures, hate speech accounted for up to 0.06 per cent or 6 in every 10,000 pieces of content viewed on the platform in the first quarter of 2021.

While that sounds like a relatively low figure, Facebook's figures also show it had 1.8 billion daily users in the same time period, meaning millions of those users could have encountered hate speech on Facebook.

Can Europe keep up with the world's 5G leaders?