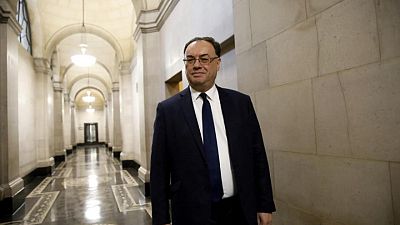 LONDON -Bank of England Governor Andrew Bailey promised “tough love” for some financial technology firms and “disappointed ambitions” for others, as the central bank seeks to ensure that innovation in cryptocurrencies does not create financial instability.

Bailey, speaking to the annual conference of financial trade body TheCityUK, said the BoE did not oppose competition, but did want financial innovation to serve the wider public interest.

“There will inevitably be elements of tough love in such a process, and some disappointed ambitions, but I am confident that out of it will come a robust form of innovation,” Bailey said.

British finance minister Rishi Sunak asked the BoE in April to look at the case for establishing its own central bank digital currency, which he dubbed ‘Britcoin’, to respond to the potential challenge from cryptocurrencies such as bitcoin.

While bitcoin’s volatility and slow transaction speeds have curbed its appeal for mainstream commerce, alternative so-called ‘stablecoins’ – which are typically pegged to a national currency, could undermine the traditional banking system.

Facebook’s proposal in 2019 to set up its own stablecoin alarmed many central bankers, and last week the BoE set out detailed proposals to regulate private digital currencies.

“A key requirement will be to ensure that, unless the stablecoin is operating as a bank, the backing assets for stablecoins cover the outstanding coin issuance at all times,” Bailey said.

A central bank digital currency could offer an alternative, enabling the public to hold money electronically at the BoE rather than as cash or in a commercial bank account.