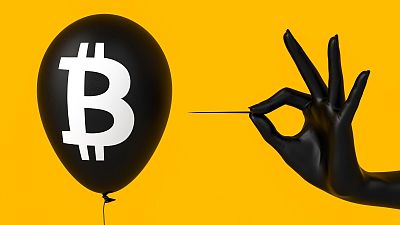 Bitcoin suffered one of its biggest singles losses to date on Wednesday.   -   Copyright  Getty Images via Canva
By Tom Bateman  •  Updated: 20/05/2021

If you follow the cryptocurrency markets you will have noticed it hasn't been a great week for them, with the sector as a whole losing almost $1 trillion (€820 billion) in the biggest one-day drop since March 2020.

The price of Bitcoin fell by almost a third at one point on Wednesday. Despite a later rally, Bitcoin lost around $70 billion (€57.3 billion) in market value in just 24 hours.

Rival coin Ethereum was among the other cryptocurrencies plummeting in value this week, dropping 28 per cent on Wednesday. Reddit favourite Dogecoin reached a low of $0.33 (€0.27) on Wednesday, before falling again to $0.31 (€0.25) on Thursday.

Wednesday marked the biggest daily percentage shift in the value of either coin in over a year, as traders were spooked by an announcement that China was moving to further restrict the use of cryptocurrencies.

The news compounded what had already been a difficult period for Bitcoin. The digital currency had previously lost over 10 per cent of its value after billionaire-turned crypto influencer Elon Musk tweeted that his electric car company Tesla would no longer accept it as payment, citing environmental concerns.

What has China done?

A key factor in Wednesday's price crash was a move by Chinese financial institutions to further limit the uses of crypto in the country.

A statement released by the Chinese Banking Association on Tuesday warned financial institutions should “resolutely refrain" from providing services using digital currencies because of their volatility.

While this is not the first time Beijing has moved to block domestic access to cryptocurrencies – which are often favoured for the anonymity they can provide – Tuesday's announcement marks a broader set of restrictions.

The move banned Chinese institutions from offering cryptocurrency registration, trading, clearing, payment, and settlement, as well as exchanging the digital currencies for either the Chinese Yuan or foreign currencies.

Winston Ma, adjunct professor at NYU Law School and author of the book ‘The Digital War,’ told Reuters the new rules were designed to completely cut crypto-related transactions out of China's financial systems, and that he expected the government to roll out new regulations targeting crypto assets.

Conversely, Hong Kong's Bitcoin Association highlighted that previous surges in Bitcoin's price in 2013 and 2017 had also triggered action in China.

"For those new to #Bitcoin, it is customary for the People's Bank of China to ban Bitcoin at least once in a bull cycle," the organisation tweeted on Tuesday.

What will happen now?

This year has seen a huge growth in cryptocurrency markets. Despite Wednesday's losses, Bitcoin is still up roughly 30 per cent in 2021, and almost 300 per cent compared with a year ago.

With this growth has come increased attention from governments and regulators.

Gary Gensler, who took over as chairman of the United States' Securities and Exchange Commission last month, has said that cryptocurrency markets would benefit from more oversight to protect investors.

The European Central Bank continues to urge caution on cryptocurrencies. The bank's May 2021 financial stability review noted that "the surge in bitcoin prices has eclipsed previous financial bubbles like ‘tulip mania’ and the South Sea Bubble in the 1600s and 1700s".

A rise in the rate of inflation as global economies reopen following the COVID-19 pandemic could also be at play.

"Higher-risk assets, whether in the form... of cryptocurrencies or the more speculative growth stocks, are seeing their multiples taken down markedly as investors begin to reassess what impact the potential for inflation will have," said David Mazza, managing director at financial services firm Direxion.

Despite the losses, some crypto investors remain confident in the potential of digital currencies.

"Bitcoin may fall a little further but is likely to stabilise around $30,000 [€24,600]," said Justin d'Anethan, head of exchange sales at Diginex, a Singapore-based digital asset market.

Despite his role in sparking Bitcoin's initial slide, Musk also appears to remain bullish on the cryptocurrency.

"Tesla has diamond hands," he tweeted on Wednesday, indicating the company has no intention of liquidating its vast Bitcoin holdings, estimated in March to be worth almost $2.5 billion (€2.04 billion).