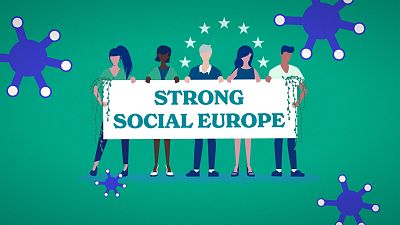 What are job retention schemes?

During the pandemic, EU governments have been subsidising wages which has allowed companies to keep workers on the payroll.

These emergency job retention schemes, often known as furlough or short-time work schemes have kept millions of people in work across Europe.

The EU’s SURE (Support to mitigate Unemployment Risks in an Emergency) initiative has provided up to 100 billion euros in loans to member states to support these schemes, acting as a second line of defence. It is estimated that SURE supported between 25 and 30 million people in 2020 and between 1.5 and 2.5 million firms have benefitted.

What happens after they come to an end?

The European Union’s goal emerging from the Pandemic is a ‘strong social Europe’.

Its Pillar of Social Rights Action Plan sets out three targets to be achieved by 2030:

At least 78% of adults should be in employment, at least 60% should participate in training every year, and the number of people at risk of poverty or social exclusion should be reduced by at least 15 million.

As part of this, the EU has set out steps to help member countries maintain and create jobs as they come out of the Covid-19 crisis. The aim is for their economies to be resilient and that the recovery is fair and inclusive for everyone.

It recommends that EU countries create new jobs by supporting entrepreneurs and training people in new skills to get jobs in growing sectors such as green and digital. It also recommends hiring incentives for companies.

How will this be financed?